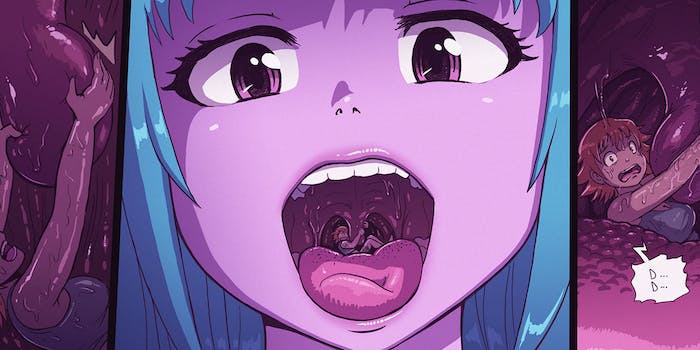 Giantess comics are a big deal. Here are the best ones

Fulfill your biggest dreams with these comic series.

It doesn’t take a size kink fan to prove giantess comics fill an enormous niche desire. Cheaper than videos and more intense than still images, giantess comics let artists and writers fulfill their readers’ wildest dreams through short-form digital stories. Watch giant women scoop up their exes and vore them, stomp little men to death, go on a rampage throughout a sprawling metropolis, or all three in one story!

Only a limited number of Microne Magazine copies have been officially translated into English, although the few that have are available on DLSite. For fluent Japanese readers, there are over 60 issues that can also be purchased on DLSite.

Giantess Fan offers an enormous giantess comic backlog, and one of its best series includes its growth and shrinking collection Portals. The series offers a mixture of stories featuring women who, depending on which portal they go through, grow into giantesses or unexpectedly shrink into miniature toys for giant women’s enjoyment, depending on which portal they go through. The women range from secretly want to enter into portals that will turn them into giants to giantesses enacting revenge on their shrunken friends.

Readers can check out Portals by subscribing to Giantess Fan. Subscriptions start at $24.95 per month with a discount for an annual membership.

American size kink artist Jitensha traditionally creates giant comics, although her giantess material is just as lovely. In her three-part comic collection Size Horrors, Jitensha offers two stories where normal-sized women find themselves shrunken and at the mercy of a giantess. In “How to Get Rid of your Ex 2,” a city girl finds herself at the hands of a straight couple’s gigantic lovemaking, and in “Lactose Intolerance,” the lesbian giantess content includes watersports and a farting kink.

While the collection’s third story exclusively focuses on a giant man, and the first story primarily focuses on a shrunken woman with a giant man, the full collection offers plenty of material for readers into giant men and women alike. Interested size kinksters can pick up Size Horrors from Jitensha’s online store.

Giantess artist guireyart has a way with feet. In his comic series Toetally, everyone has the power to shrink themselves, and some can even shrink others. Death isn’t much of an issue, as with insurance, everyone can be revived. This predominantly results in gigantic women looming their enormous soles over their miniature playthings and crushing them to deeath, complete with close-up shots of their toes and wrinkles. Check out guireyart’s Twitter for more information, or pick up the series on Gumroad for $3 per season. Fans can also support guireyart over on Patreon.

It’s hard to pick just one giantess comic from Karbo, in part because he’s the undisputed king of anime-inspired giantess vore. Karbo’s work has been around for more than a decade, including a sizable collection of manga and comic illustrations. Most of these have fantasy themes based around Karbo’s original world Felarya, where giantess nagas and fairies feast off small adventurers.

Karbo posts most of his content for free on Twitter and DeviantArt, although he also runs a Patreon page where subscribers can view upcoming pictures ahead of time. If you’re interested in reading his giantess vore manga catalog, he sells comics in eBook form for $10 or less.

Whoops, someone at Image Comics didn’t know this was a fetish!

Upcoming sci-fi series Big Girls stars Ember, a run-of-the-mill girl turned into a 300-foot giantess. Along with her fellow giantessees, she’s tasked with protecting the world from men transformed into colossal mutants. Ember goes toe-to-toe with the infestation in the series, with plenty of city destruction and micro/macro shots to go along with the fun. The series may sound like a bit of a fever trip, but for size kinksters, it’s one worth tagging along for the ride.