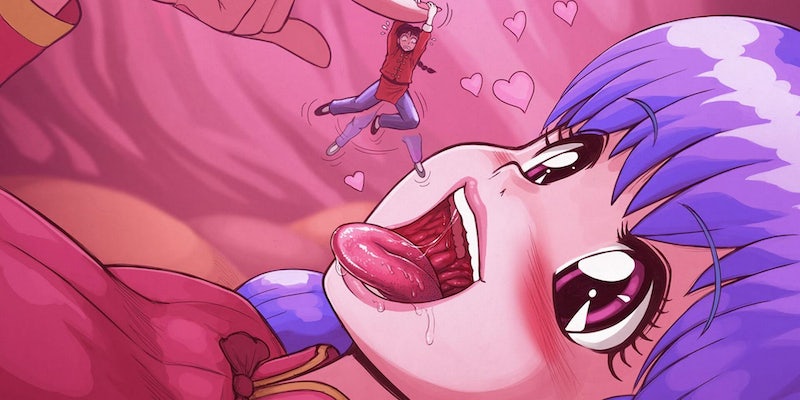 Macrophilia is bigger than ever. Why?

A sea monster holds a wooden ship in her palm, balancing it on one hand as she devours its crew one by one. She’s absolutely enormous. A grin on her face and a slight blush reveals she’s enjoying herself quite a bit. With the entire vessel in her hand, she could do whatever she pleases with the remaining survivors, although it’s implied she isn’t done eating.

Giantess fetishism falls under the sexual paraphilia “macrophilia” (or “macro”), a “sexual paraphilia in which individuals derive sexual arousal from a fascination with giants and/or a sexual fantasy involving giants,” according to Psychology Today. Macrophilia’s counterpart is microphilia, or “micro,” a paraphilia in which the participant experiences sexual pleasure from smaller things. Just as sadism and masochism are two sides of the same coin, so are macro and micro.

“It’s allowing your mind to go wherever it wants to go, whilst engaging in play to gain the maximum sexual arousal,” Supple told Vice. “Some want to feel and experience terror—being crushed or controlled. Everyone is different in what they want to experience.”

Psychologist Mark Griffiths theorizes that macrophilia’s roots “lie in childhood and early adolescence where sexual arousal is, at first, accidentally associated with giants.” That arousal, Griffiths says, is then reinforced over time through “classical conditioning.” Granted, Griffiths admits this is nothing more than speculation.

While it’s hard to pinpoint what specifically causes macrophilia, kink and fetishism are part of normal human sexual experiences. So if giantesses are part of your sexual desires, by all means, embrace them.

Macro content comes in various forms, and its most popular iteration is, by far, artwork. The artist mentioned at the start of this piece, Karbo, is one of the most well-known names in the macro fandom. His work features anime-like characters and focuses mostly on soft vore, enormous monster girls, and their miniature victims. Other popular artists include Pogojo, ReSizeStuff, Sihagen, Kuro Oolong, and yilx. Eka’s Portal is an immensely popular website for vore-themed work, including giantess vore, and additional macro artists can be found on Pixiv and DeviantArt.

Giantess fans have created plenty of games over the years, too, many of which incredibly immersive. Sizebox offers a virtual sandbox where players can import models, make them grow or shrink, and run custom fetish animations. Resize Me is an anime virtual reality game where players are gradually shrunken by a friend and played with. And for a more retro giantess experience, check out Demolition Girl, a Japanese PlayStation 2 game where players star as a Japanese National Guard member trying to stop a gigantic woman from destroying Japan.