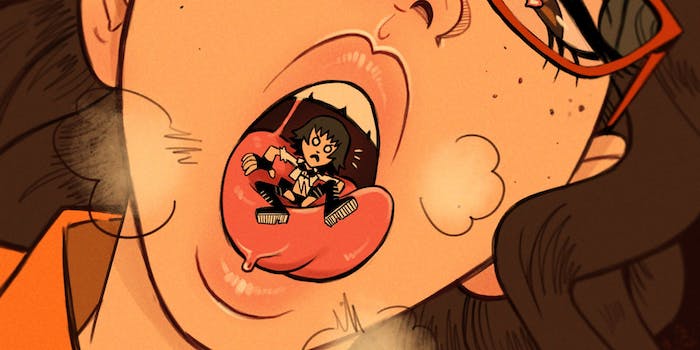 Sasquatch, Godzilla, King Kong, Loch Ness. Goblin, ghoul, a zombie with no conscience. What do these things all have in common? None of them are quite as popular as giantess vore.

What is giantess vore?

Giantess vore is a shorthand term for any kink scenario in which a gigantic woman consumes another, smaller person. Also referred to as macrophilia (macro) and vorarephilia (vore), giantess vore involves a predator-prey dynamic that parallels Dominance and submission (D/s). In most cases, the giantess usually serves as the Dominant, with the person she devours as the submissive. Some artists enjoy reversing the dynamic, but that’s more of an exception than the rule.

Giantess vore is a popular part of the macrophilia community for many reasons. The two fetishes have a lot in common: Both are otherworldly power fantasies that involve an overbearing, powerful woman and her smaller victim. Themes of submission, sadomasochism, and total control are prominent in both kinks, and vore plays well with other adjacent macro kinks, such as foot fetishism or crushing.

Because macro and vore content commonly walk hand-in-hand, many giantess vore fans discover one side of the kink and fall into the other. Macro artist Spitty said their entry into the fetish was through vore artwork, although they now see themselves primarily as a giantess content creator.

“Vore is just one possible expression of the dynamic between a giant person and a tiny person,” Spitty told the Daily Dot. “I think the appeal lies in the absurd display of power, the dominant-submissive relationship escalated into a primal predator-prey relationship. But there are many people who dig the intimacy of being completely inside another (or of another being completely inside you) and through digestion becoming one.”

Giantess vore is a popular fantasy among straight men who are already into giantesses, but the size kink community has long appealed to queer creators and kinksters. Arctic Giantess is a bisexual switch who began creating her own macro vore videos and photos in 2015 after she felt “frustrated by the lack of fetishist-inspired work” available for size kinksters. While her intro into size play and vore was through taking on the prey role, she says she’s since “grown” into being a giantess (pun intended).

“There’s a lot of great content out there, but a lot of the models themselves don’t actually have the fetishes they’re aiming to cater towards. I wanted to see more content that matched what I liked, and I thought there was no better way than to create it myself,” she told the Daily Dot.

Arctic says the Twitter macro and vore communities are, for the most part, “queer friendly and accepting.” She said she’s observed how queer women engage in the giantess-micro power dynamic in a different way than their straight counterparts.

“I’ve noticed that a lot of women are into the [safe for work] aspect of giantess interactions and less ‘MORE ASS AND BOOBIES’ that I hear from straight men all the time,” she said. “I hate to categorize and separate the two, as there are many who don’t fit these stereotypes, but I have noticed…. a trend.”

But the size kink world can still feel very heteronormative. The giantess community initially appeared “overwhelmingly cis and straight” from the outside to Spitty, which prevented them from joining at first. They also said that terms like “giantess fetish” can be misleading, given how macrophilia fans come in a wide assortment of genders and enjoy all sorts of giant characters, including giant men and nonbinary macro figures.

“Although it’s more queer-friendly than I had anticipated, we still have such a long way to go before we can say that this online space is definitively queer-friendly,” Spitty said. “Very generally speaking, I feel like there is less gatekeeping from the queer folks in the community, and there’s a genuine push for greater inclusivity.”

For giantess vore videos, ManyVids, Clips4Sale, and IWantClips host a sizable collection of performers working with all sorts of premises, from colossal women to shrunken prey. Top recommendations include AstroDomina, Miss Nera Skye, CalliRose, Giantess Katelyn, Mistress Kaedra, and Arctic Giantess. For old-school fans, there’s also a sizable backlog of classic giantess vore content from Tywest Videos, Canadian Giantess, and Media Impact on Size Fetish Zone (albeit some of these videos have aged better than others over the years).