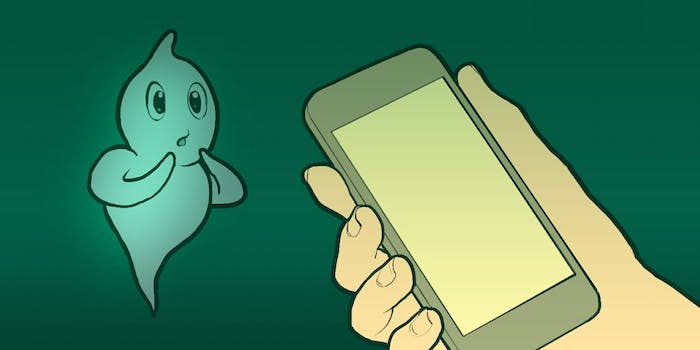 Can this ghost hunting app tell me if my apartment is haunted?

Ghosts, presumably, are all around us. If you believe in them, the sheer number of dead people versus living mean that we’re breathing about 40 percent ectoplasm at any given time. So instead of going to knowingly haunted sites, I wanted to see what this app could detect in my everyday life.

For a highly calibrated piece of equipment, Ghost Hunter M2 sure does scare you with fake thunder sounds a bunch. The app offers a slew of different features, each described in such detail that you may need a Ph.D. in paranormal studies to decipher just what it is they do. The Electronic Voice Phenomena (EVP) instrument presents words detected through an “advanced and proprietary computational phonetic pattern.” The Fast Fourier Transform Visualizer (FFT-V) analyzes audio signals through the “acoustic to electric transducer system.” The Sensor Sweep gives you visual representation of potential nearby paranormal activity, the closest thing the app has to a Look, a ghost! feature.

The Sweep, EVP, EMF (Electro Magnetic Field) and Audio features are all represented on a basic dashboard, which is your best shot at catching a ghost in your vicinity. Here’s what I found in my neighborhood. 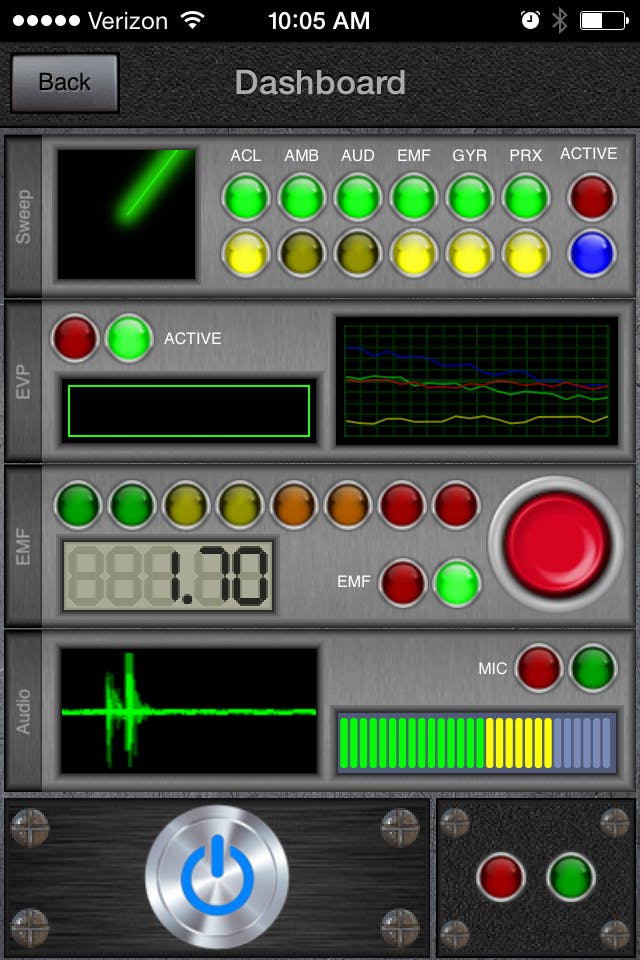 I live in a prewar apartment building, and at least two tenants have died since I’ve been here, so if ghosts exist, I’m pretty sure there would be one around.

I started with the Audio feature, which I think picks up supernatural voices. I had my phone’s volume all the way up, and was startled when a robotic voice shouted what sounded like “YOU’RE THE BOY” at me as I was trying to answer an email. I switched to the EVP feature, and after it warmed up, presented me with a collection of words that painted a picture of a very specific ghost. Cancer, cellar, chain, ankle and finally Brian. My apartment building was haunted by Brian, who had cancer but apparently was shackled to the walls of the laundry room. A cursory Google search showed two Brians have lived at my building’s address. I do not know if they are alive.

Later, I made myself eggs, and as I went to the fridge the EVP feature shouted out “left.” Sure enough, the eggs were on the left of the fridge. Thanks, Brian!

My first stop was my best guess for this “cellar” where Brian obviously lives (resides? deads?). My building’s laundry room has always been pretty spooky to me. The EVP brought up the words sing and receive, and I listened for a singing voice. Or was I supposed to be the one singing? It’s quite annoying that ghosts can’t use their words. 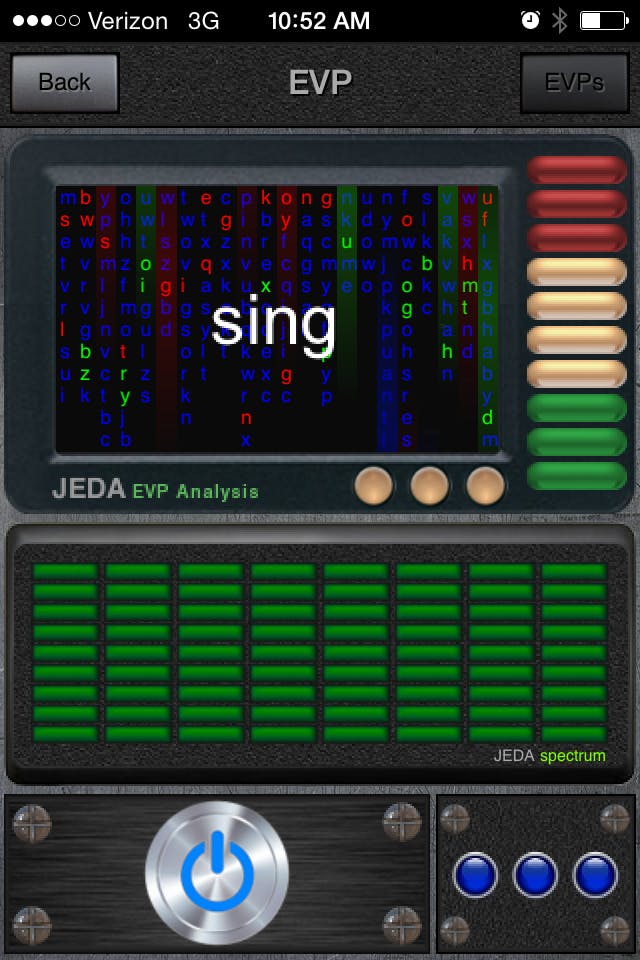 When I left the house I switched to the dashboard feature to get the full experience. My first stop was the liquor store for some white wine I was going to cook with for lunch (spooooky.)

No words appeared, but the Sensor Sweep brought up a blip on the screen. “The strength of the anomaly will be indicated by color,” says the app, with blue being the weakest, then green, yellow and red. I noticed a yellow dot, and walked toward it. Then, a blue dot appeared behind me, and then a green one to my side. A presence was apparently circling me, but I felt nothing. C’mon ghosts, show yourselves! I grabbed the cheapest bottle and left.

My grocery store is in the middle of a renovation, so surely the construction had rattled some spirits from the beyond. But the Trade Fair was a dead zone for paranormal activity, even by the butcher. At least give me the ghost of a chicken or something! I got shallots.

As I sat waiting for a representative to help me activate my new debit card, two words jumped out in quick succession: minister and Harmon. Was the bank built on some forgotten grave? Was a local minister horribly murdered while on his way to deposit a check, and now he haunts the ATM? A quick Google search shows that a minister Harmon was murdered in Brockton, MA in 2013, so maybe he’s just down for a visit.

Ghosts aside, this is probably the creepiest place in my neighborhood. What’s stranger than a holistic spa for dogs? Things were about to get even weirder, because this place was crawling with paranormal activity. From the moment I stepped in the door, the dashboard was on fire. Two presences, one green and one red, appeared to be on the street just outside, and the EVP flashed the words rumor, ear and blood. “What the hell happened at the pet spa?” I wondered.

There’s a big part of me that wants to believe in ghosts, for all the reasons you’d expect. I want comfort in knowing that death is not the end. I want to know what happens to all our energy when our bodies give out. I want to be able to make someone dance to Harry Belafonte and then grow shrimp hands like in Beetlejuice.

But mainly, I sort of want to know that someone is always there. A friend grew up in what was reported to be a haunted house: Everyone who had ever lived there experienced some sort of activity. My friend and her family remember the ghost as helpful, opening cabinets and pulling out bowls when needed and flinging car keys to a visible spot when they were difficult to find. I want my own ghost friend.

I’ve kept the Ghost Hunter M2 dashboard on as I’ve written this, hoping that it’ll give me more clues about Brian—if Brian ever really existed. It’s said both sing and singer, so perhaps that was his profession. I think he might have been from Canada.

The last word it said to me before I finally ran out of battery was aim. What do you want me to aim for, Brian? What would direct me to you? 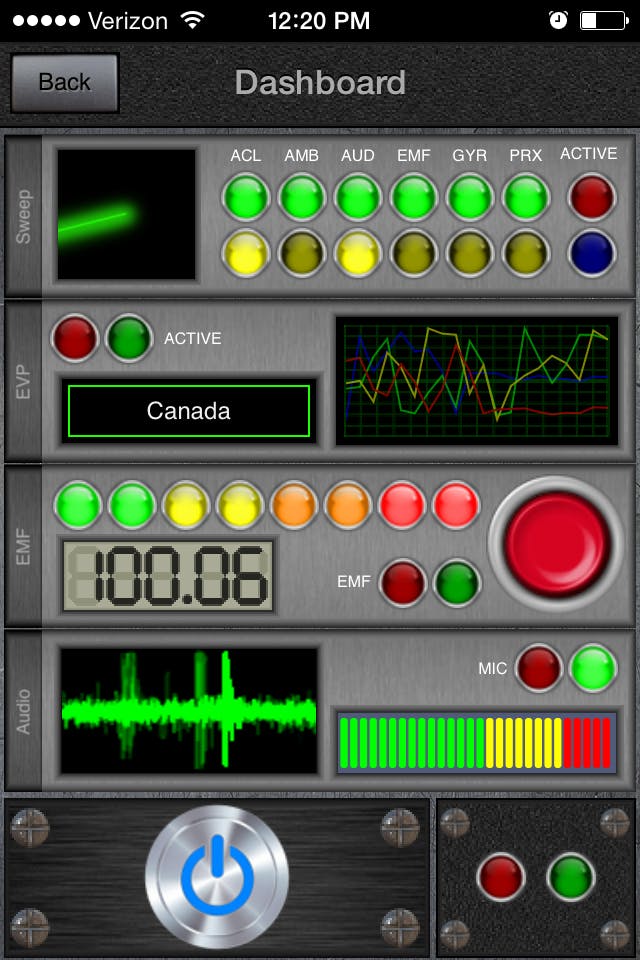 I’m fairly certain none of this is real. Fluctuations in electromagnetic fields are probably not ghosts, and even if they are, they probably can’t be measured all that well by my iPhone 4S. But right now, the logic of knowing this is an app with a goofy font that cost less than a dollar is at odds with my wanting to believe this is real. I want to feel a chill down my spine and look down to see a yellow presence on the Sweep. I want to believe that when my cats run across the apartment for no reason, it’s because they felt something. I want to know that when my plants die it’s because they’re possessed, not because I’m terrible at keeping plants alive.

There are dozens of ghost finding apps in the iTunes store, which suggests that I’m not the only one who feels this way. We already use our phones to feel less alone, whether it’s through Tinder or Instagram. Why should that be limited to the living?