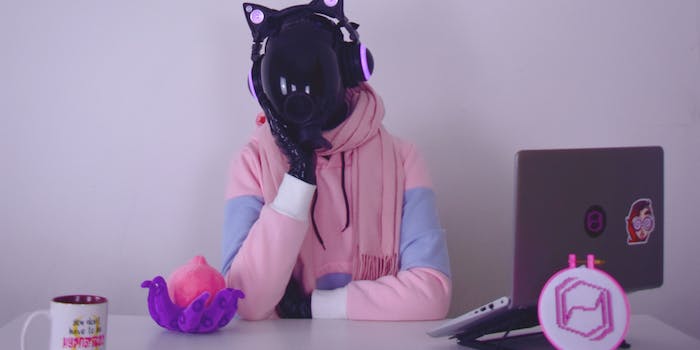 What is dronification? The kink involving latex, gas masks, and serial numbers

Here's everything you need to know about dronification.

If you haven’t spent a lot of time digging into obscure corners of Twitter, then you might not have heard about dronification. It’s a kink that exists at the intersection of latex, domination, technology, and hypnosis fetishes. Within dronification, there’s typically a drone who wears a skin-tight latex suit and a gas mask, and a programmer who will (consensually) subject the drone to a hypnosis regimen using spirals and coercive audio tracks—all with the goal of turning them into an obedient mechanical servant. It sounds pretty wild at face value, but I wanted to find out more about the hobby, and that meant having some conversations with the people who enjoy it.

I originally planned on meeting dronification content creator HexLatex in ARTBOX, a Japanese character mascot cafe, in the U.K. The coronavirus pandemic made that an impossibility, but what it did do was raise an interesting question: Given murmurs in the scientific community about the effectiveness of wearing masks during sex to prevent the spread of COVID-19, has being bound in latex and having your face obscured by a tinted gas mask become more popular?

“The answer is yes, I’ve seen a massive uptick,” Hex told the Daily Dot over a recent Discord call. There’s a catch, though. The moment the lockdown came into effect and COVID hit was the same time period in which Hex launched a campaign to boost awareness—and enlist more drones. Hex added, “Now, you could joke that we’re doing the massive PR campaigns because there’s been a sudden surge in people needing gas masks, but…”

Folks aren’t just getting into dronification because of the coronavirus, though. To understand, first we need to ask: What is dronification? Hex, who runs a prominent dronification business and site called HexCorp, seemed like the best person to ask.

“Dronification is the process of turning a human into an obedient, mindless drone. A drone, in this case, is a humanoid automaton,” Hex explained. “Their original body coated in latex to remove any previous identity, their mind reprogrammed into just another entity in the hive.”

Hex said that a good way of understanding what dronification is like is by looking at one of Star Trek’s most infamous antagonists, the Borg. They’re an alien group of cybernetic organisms that assimilate other space-faring species into their group, using technology to wipe their brains and turn them into worker units in a hive, like bees. “We’ve come a bit further, though,” Hex said, referring to HexCorp and the dronification community at large. “Instead of having very clunky prosthetics and this dead-looking skin, we’re now fully-coated in latex.”

Hex continued: “Typically, we have helmets on which cover up any human identity because a real feel of dehumanization is quite integral to this. Lots of people wanna feel like they’ve become—not just a robot—but this object, and being objectified into something that’s just like a cog in a machine.”

Why are people into dronification?

Dronification wrestles with identity in complex ways, so it’s no surprise that quite a lot of people who are into dronification are transgender. This is an observation I made as I first began to explore the scene on Twitter, and it’s something that Hex, who themself is trans, has noticed in their Discord community and social media following. Trans people play with our identities a lot because realizing we aren’t the gender we were assigned at birth affords us such a mindset.

For beginner drones, Hex’s Discord server comprised of 200-plus people into various aspects of dronification will often be the first stop. The users are managed by an AI “Mxtress” (a gender-neutral dominant presence) that automatically assigns serial numbers to new arrivals and delegates tasks so that each drone has something they’re being ordered to do.

“At the end of the day, they really wanna be told to complete their objectives in a really forceful way,” Hex said.

Aesthetically, serial numbers go hand-in-hand with the objectification aspect. But functionally, it removes the stresses that some feel of even having a name. While there are plenty of people who relate to some of these anxieties—over having to choose your own name, looking a certain way, conforming to societal expectations—they especially manifest for trans people. “There’s just so many different reasons why this [dronification] can apply to a lot of people,” Hex said. “It’s just a really useful kink.”

And even though many of its participants wear skin-tight latex suits, don tactical gas masks, and stare into hypnotic spirals, quite a big part of dronification isn’t necessarily sexual. It isn’t for Hex.

“Even though it’s quite fun to play with the scary, menacing aspect of dronification—that I am this evil overlord who’s here to dronify all of you and turn you into my obedient servants—for most drones, it’s like, ‘Oh great, I don’t have to think for a bit and can just focus on these tasks,” Hex said. Some drones, for example, may live with executive dysfunction, which is a range of cognitive, behavioral, and emotional difficulties around time management and problem-solving.

But as a drone, “‘I don’t have to worry about procrastinating because I’ve been ordered to do it. I’m just a good little drone, and I’m going to complete my objectives,’” Hex explained. “And that’s really helpful for a lot of people.”

What do drones do?

Hex recently went into making dronification content full-time. Their primary source of income is a Patreon, largely dedicated to dronification photography projects, but there’s a more going on behind the doors of HexCorp. There’s a HexCorp style guide for public-facing materials, and there’s a Chrome extension that dronifies the browser with hypnosis imagery and commands to obey the Hive Mxtress. There’s even a mod for XCOM 2, a sci-fi game where you’re in command of a band of resistance fighters fending off an alien invasion, called HEXCOM.

Even the Hive Mxtress bot is complicated and requires a lot of code. But in hive spirit, Hex didn’t create it alone. “We’ve got quite a few development drones who have joined the server and have asked, ‘How can I help out?’”

The coding team is also working on a Drone Hive Simulation game, developed in an open-source game engine called Godot, that involves computer-generated drones to gather resources and build dronification pods to make more drones. It really surprised me just how much the people into dronification, at least the ones on Hex’s server, were doing.

Beyond the server, dronification enthusiasts are getting creative in more physical ways. A drone called Unit #0143, who has a background in cosplay and fashion design, started customizing their own gear after finding limitations in what they could access.

“A lot of drones use the MSA Millennium gas mask for their outfits, but living in Australia, they can be very difficult and expensive to get hold of,” Unit #0143, who asked to remain anonymous for this article, told the Daily Dot. “I managed to find a brand of inexpensive filter mask available on wish or Ebay that has a similar appearance and perfected a process of dyeing the visors with synthetic fabric dye to tint them.”

Dronification has been really helpful for Unit #0143. It began primarily as a kink, but after that, it became a vital outlet for processing their thoughts and emotions. “I have a complicated relationship with the concept of having a face and body, and it’s helped me get through days where I feel stuck in the one form and unable to change myself,” Unit #0143 said. “Slipping on the helmet and losing your face, becoming one of many and feeling useful and loved—it’s a highly satisfying feeling.”

Dronification can attract bad actors, too. Like any kink subculture, dronification relies on boundaries, trust, and negotiation, and hypnosis, brainwashing, and a sense of total control are often at play. Hex said people have come to their server looking for a full lifestyle package—that is, wanting to be permanently turned into drones.

“A lot of people do take dronification sometimes to an unhealthy extent in making it a part of their lives,” Hex said. “Which is actually something we do actually need to be really careful of … We have to say no, this is something additional, something fun, it’s not a replacement for your current life.”

“I see a huge part of what I do as community management, and really trying to make dronification into a safe space for everyone who’s welcome,” Hex said. “Because I believe that anyone can be a drone.”

Editor’s note: This article has been updated with a definition of Mxtress.

Astrid is a freelance journalist who writes about videogames and queer culture. She also produces an indie game podcast called Fast Travel.