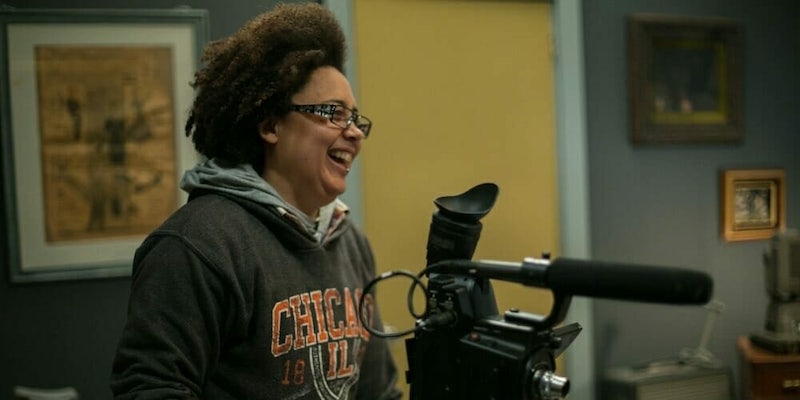 Behind the camera, Black women are finding their power.

“Whoever wins the war gets to write the history, right? So whoever’s behind the camera is basically writing the story,” Houston, who has gone to win dozens of industry awards, tells the Daily Dot. “And if all we have are white cis guys writing their story, those are the only stories we have.”

And little by little, they’re winning the war and telling the story.

Rise of the auteurs

Houston isn’t the only one driving porn’s Black renaissance. Nor is the only one who understands its necessity.

“One of the things I definitely can see with more people of color in different positions—whether it be productions, directing, owning, investing—is that we actually understand the ramifications of what it’s like to be on the outskirts of life and want to uplift people out of that,” says Lotus Lain, a Los Angeles-based sex worker and industry relations advocate for the Free Speech Coalition.

“When it’s sets controlled by women of color, it’s definitely more comfortable. We understand each other more and what needs to happen, and the jokes are more comfortable,” says Lain, who has worked on both mainstream and independent productions. She says on set with other women, she doesn’t have to laugh at “typical meathead bro” humor.

She started Slanted Tendency in 2012 after she became frustrated with the lack of options available to her as both participant and viewer.

“Most of the big studios are straight, white, and patriarchal, so there wasn’t really an outlet for my look,” Trick says. “Even with Kink.com, I tried to apply with my lover and they took her because she was a classic hourglass shape, and she was white, and I was nothing like that, you know, queer woman of color, who was muscular with tattoos. I have yet to see that in their videos.” (In response, a spokesperson for Kink told the Daily Dot that the site prides itself on its reputation of diversity in shapes, races, sexualities, and genders and that the platform actively works with queer and trans directors and performers, and people of color.)

Black female performers can often be forced into uncomfortable roles or tired tropes like the hypersexual jezebel or the “ghetto” Black girl and end up fetishized and denied autonomy over their bodies and stories. Sometimes they aren’t considered at all.

The highs and lows of accessibility

“With the improvement of accessibility with technology, it’s given girls like us, women of color, way more independence. We don’t need to get a studio to notice us, we can just go on a webcam and get our fans just like that,” Lain says.

Social media has likewise been a valuable tool for independent sex workers to market themselves outside of an industry that won’t accept them. Some, like Lain, use it as a platform to air grievances and hold the industry accountable.

“We do have a fan base, as much as the mainstream industry would like to deny that or say the numbers aren’t there, I don’t know how people like myself or so many countless others, how are they able to do their own little webcam side-hustle career and make money off of it?” Lain says. “Because they have fans. Because we’re desired.”

But the sword is double-edged.

That’s not even taking into account the audience who isn’t online. Structural barriers and racial discrimination limit internet access in many communities of color and worsen the digital divide, according to a 2016 report by Free Press. Internet-service providers systematically favor wealthier and white areas over those heavily populated by people of color. Furthermore, attempts to regulate the online sex industry have done little more than displace sex workers.

The recently implemented and moral panic-induced SESTA-FOSTA bill was designed to stop sex trafficking by holding websites accountable for users’ content but ultimately harmed many sex workers. In the wake of its proposal, sites like Google Drive cracked down on adult content uploaded to its platform and removed pornographic material from many sex workers’ accounts.

“You have all these independents and you have all of these different voices, but how do they get heard? And that’s what I think is a big issue,” Houston says. “How do all these people who have now been displaced, how do we get heard?”

Still, there’s a world out there being created by and for Black women, one’s that disruptive, subversive, and uniquely female. As the market recalibrates, the constant is that people are getting off to it.

“Queer people of color, we’re a small market, we’re insular,” Trick says. “I think if we continue to make content that is for us and by us, that’s the best way to go.”

Correction: The Crash Pad Series was not filmed with an iPhone.

Editor’s note: This article’s headline has been changed.