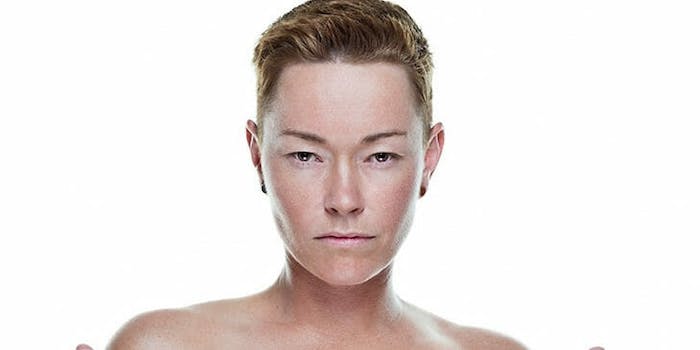 Lee has been dubbed an icon and 'androgynous gender warrior.'

“Working in adult has helped define my boundaries in ways that sex ed, television, or any other part of growing up in America failed to do,” Lee told the Daily Dot. “It’s an art form that is beautifully vulnerable and honest. I like to consider each movie a sort of documentation of where I’m at in my sexual exploration—like a scrapbook. The way my body and desires have changed over the years is incredible. The way my body responds to orgasm, what kinds of sensation I like, and how I sound when I come have evolved over the years.”

With a 2010 blog post, Lee officially came out as genderqueer—someone who has “fluid ideas about gender expression and may not identify as being a man or a woman,” as they put it—and expressed their preference for neutral pronouns.

“As a person who was assigned female at birth, many things that society expects of me as a ‘woman’ feel unnatural,” they wrote, explaining that identifying as transgender pushed them toward masculine signifiers that didn’t feel natural, either. As such, the gendered roles Lee typically encountered in the adult industry felt limiting.

8 things you should know about Jiz Lee

In season two and three of Transparent, Sarah (Amy Landecker) was seeing a dominant—a friendly and transactional relationship Sarah effectively ended when she insisted on switching their roles and exploded with frightening rage. Lee played Pony, the dom, and earned nominations for Crossover Star of the Year titles at both the 2017 XBiz and AVN Awards for their work.

The 37-year-old made their entrance into adult cinema with 2005’s The Crash Pad, a film by queer pornographer Shine Louise Houston.

5) …and an advocate for safer sex rights and sex education

Some critics, Lee included, said Prop 60 would have placed unfair added expenses on solo and indie performers. Lee argued against involving sex workers in legal disputes that could publicize their personal information and jeopardize their privacy.

Lee tells the Daily Dot that personally, they’re a condom-only performer by choice. Still, Lee joined with industry peers to fight the measure, testifying at the California State Capitol and in Cal-OSHA meetings. Their work paid off: Voters rejected Prop 60.

6) Jiz is a published author and editor

Amid performance, activism, philanthropy, and writing, Lee still makes time for fitness. They’ve trained for and competed in both Olympic and Sprint distance triathlons. On their blog, Lee writes that they work out on a near-daily basis, which helps prevent burnout and promote health. “It’s enabled me to find balance, forces me off the computer to clear my head, and helped hold myself accountable to health as a priority,” Lee explains. “I’ve never felt better!”