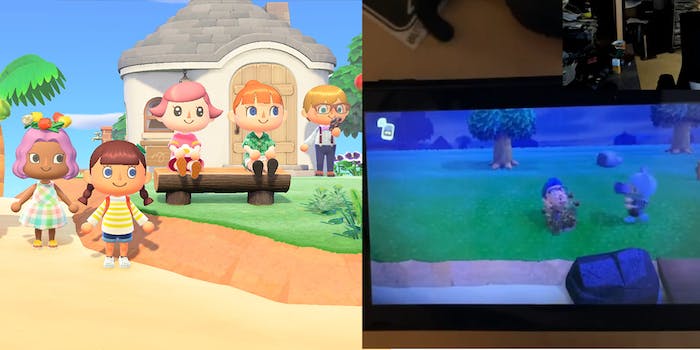 Animal Crossing can now be played with a butt plug

It's just a prototype. But boy, does it work.

It’s no secret that sex is thriving on Animal Crossing: New Horizons. Blame quarantine horniness if you want, but there’s no shame in being thirsty on your island getaway. But what if you want to take your Nook ‘n’ chill hookups to the next level? One programmer’s new project lets players connect their Bluetooth sex toys to their copy of Animal Crossing: New Horizons.

Engineer Kyle “qDot” Machulis has spent his time in quarantine expanding Buttplug, his open-source software library project that allows users to easily design programs to control sex toys and other “intimate hardware.” Using a Nintendo Switch, a Raspberry Pi, two Bluetooth dongles, and open-source Bluetooth modding projects from the gaming community, Machulis was able to carry out a man-in-the-middle attack between his Nintendo Switch and his Switch controller. He was then able to connect both the Switch and his controller to his Raspberry Pi, which let him control which devices received Animal Crossing’s controller rumble outputs.

In short, this let Machulis transfer Animal Crossing’s rumble feature to a Lovense Hush buttplug, which rattled and vibrated while carrying out in-game actions. During a 17-minute (safe-for-work) demonstration video, Machulis showed his villager carrying out “buttplug fishing” and chopping trees.

“Just in case you have a ‘getting stung by a wasp fetish,’ now you can really take it to the next level,” he joked.

The tool even works with multiplayer for teledildonics. While controller vibration features between players are minimal during online play, villagers can set “traps” for other players and lure them inside. After walking forward, the player’s buttplug will rumble until the trapped villager walks out. It’s not real-time teledildonics, Machulis warns, but as he says in his video, “there’s an interesting power dynamic to it.”

The Animal Crossing Buttplug project took about a day to make, Machulis told the Daily Dot, although it’s only a prototype for the time being. But it doesn’t just work with Animal Crossing: New Horizons. Any Switch game with rumble features, such as Super Mario Odyssey, is compatible with the prototype.

“99% of the work needed to pull this off has already been done by the game modding community. There’s quite a few projects out there that let you do things like using a mouse and keyboard or PC racing wheel to control console games, and the homebrew/console modding community is also quite active and great about documenting things,” he said. “So it was mostly me just figuring out which code I needed to use, then putting Buttplug in the right places.”

Buttplug is best known for its Intiface Game Haptics Router, which receives rumble programming on game controllers and redirects them to sex toys. A crowdsourced list of games shows that the interface supports the PC versions of Fallout: New Vegas, Bayonetta, Nier: Automata, Beat Saber, Borderlands 2, the Project64 N64 emulator, and Mortal Kombat X, among other games. Now, console gaming with the Intiface Console Game Haptics Router is possible—but still has a long way to go.

“The system as it is right now just barely works, but it was enough to make the video and get people interested,” Machulis told the Daily Dot. “However, there’s still a big gap between that and ‘anyone can use it.'”

While the Animal Crossing Switch prototype is only the first iteration of console-based sex toys, Machulis teases PlayStation 4 and Xbox One support may soon be possible. The PC iteration of the Game Haptics Router has taken off with cam models, and he hopes porting library support to more platforms will increase player access. Case in point, he showed this reporter two (NSFW) videos of sex workers using the router while playing Dark Souls.

“We’ve also got a Unity plugin now that allows people to integrate sex toys directly with their games too, instead of just depending on rumble, which doesn’t really relay game state very well. That’s getting used a couple of places already too,” Machulis said. “Hell, we’ve even got Twine support for people who want to build sex toy control into their text twine games! Lots of potential for sex tech and gaming out there now, just waiting to see where it goes!”

Players can follow Machulis’ sex toy developments on his Twitter @qDot or on his YouTube channel “Buttpluggin’ With qDot.” He also has a Patreon supporting his project.