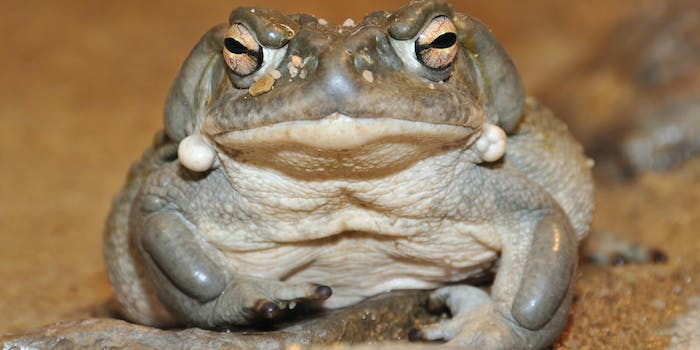 Who knew 'death by toad' was possible?

The police investigation began following “the victim’s death during the celebration of a mystic ritual,” which involved breathing in the toxins of a venomous toad, according to police.

The toad in question is called the bufo alvarius toad. Also known as the Colorado River toad, it is native to northern Mexico and the southern U.S. Its skin exudes a toxin, known as bufotenin, that has psychedelic effects. The toxin, in large enough amounts, is powerful enough to paralyze or even kill a fully grown dog.

Abad died in Videl’s home, according to Complex, after participating in the ritual. The process, which Videl has participated in himself, is intended to cleanse. Videl, whose real name is Ignacio Jordà González, took part in the ritual years ago and credits it for curing his depression and addiction. He has advocated for others to try out the process in order to “clean up their acts.” Toxic secretions from bufo alvarius toads have been used medicinally in China.

As noted by Complex, the psychedelic substance contained in bufotenin—5-MeO-DMT—shares quite a bit in common with ayahuasca, a “widely known hallucinogenic brew.” The brew, according to Healthline, is known to produce “hallucinations, out-of-body experiences, and euphoria.”

Investigators believe the ritual has been repeatedly attempted in Videl’s Enguera, Spain home. They note that participants were likely “easily influenced, vulnerable or who were seeking help for illnesses or addictions using alternative methods.”

An attorney representing Videl, Daniel Salvador, has disputed claims that his client posed as a shaman promoting the use of bufo alvarius toad secretions. He has also attempted to label Abad’s death an accident.

Videl has been charged with suspicion of manslaughter. The investigation into Abad’s death lasted 11 months and resulted in the arrest of Videl, a relative, and an employee. All three are being detained in Spain.