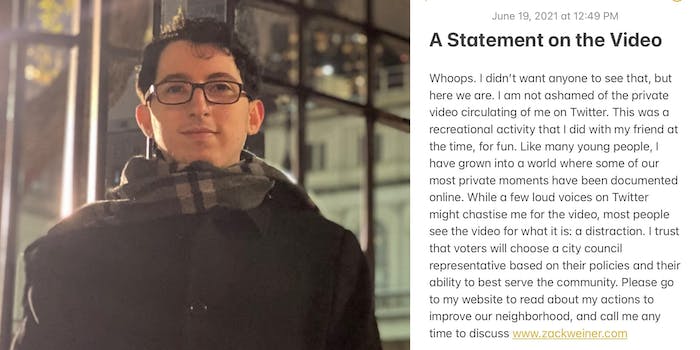 The New York Post slammed for publishing the picture of Zach Weiner.

Here’s everything you need to know.

The platforms where the video was posted, Twitter and OnlyFans, by accounts with identical usernames and profile pictures, subsequently suspended the accounts, Motherboard reports.

In a statement released on Twitter, Weiner said that, while the footage was shared without his consent, he’s “not ashamed.”

“This was a recreational activity that I did with my friend at the time, for fun,” Weiner, 26, wrote. “Like many young people, I have grown into a world where some of our most private moments have been documented online.

“While a few loud voices on Twitter might chastise me for the video, most people see the video for what it is: a distraction.”

Numerous online commentators opined that the Post was in the wrong for using an image from the video, which it reportedly learned of from Weiner’s campaign.

“If I were writing about a video of somebody engaging in consenting sexual activity with another adult that was leaked against their will I wouldn’t say they were ‘caught.’ I’d say they were the victim of a sex crime. But I guess I’m different than the New York Post,” tweeted @limitlessjest. This tweet had four times as many likes as the Post’s tweet of the story to which it responded.

The video and Weiner’s response to it may have actually helped his campaign by introducing him to a wider audience and inspiring respect for the way he’s handled having an intimate moment broadcast to the world.

As Weiner noted, young adults today haven’t known a time before the internet. They’ve spent their lives online, sharing things and experiences in their youth that later in life they may regret. Or perhaps not. As Millennials and Zoomers age, the more commonplace, and thus normalized, it will be to have a permanent living record of youthful missteps, experiments, and transgressions.

Certainly there should and always will be a line delineating the acceptable from the intolerable, but perhaps the reaction to Weiner’s sex tape is showing that people are more accepting of a wider range of behaviors than many would like to believe.