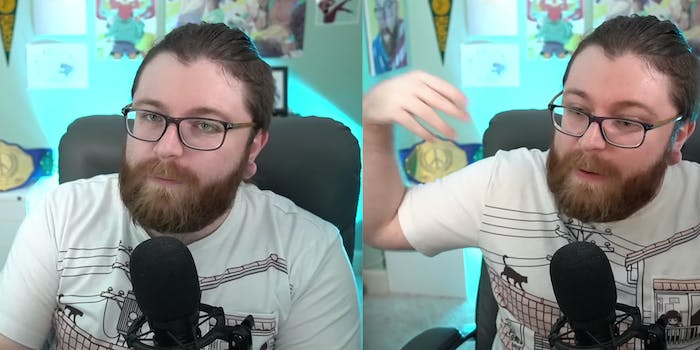 The live-streamer doubles down on his Pride argument. It doesn't go great.

Controversial live-streamer and left-wing YouTuber Vaush created waves on Twitter Monday as he spoke out about his thoughts on kink at Pride, claiming events should be welcoming for all ages rather than celebrating individuality and sexual expression among the queer community.

Users on Twitter exploded over his take on the matter, slamming him on his previous position of lowering the age of consent and claiming he is completely misinformed as to why the inclusion of kink at Pride is so crucial to the event itself.

“Kink at Pride makes people uncomfortable and makes the event less accessible, when accessibility should be a priority,” Vaush, @VaushV, tweeted on Monday. “Keep less family-friendly stuff to the many, many afterparties and adjacent, private venues every Pride has. The fact that this is controversial is insane to me.”

“Pride should be a cool, queer-friendly block party you can attend to meet with organizers and get cute shirts. Everyone should be able to attend. It should be safe and uncontroversial. Dismissing accessibility as ‘sanitization’ is a really underhanded and disgusting strategy,” Vaush, who identifies as pansexual according to Rational Wiki, continued.

On YouTube, Vaush also uploaded a 26-minute-long video explaining his take on allowing kink at Pride and called out streamers for being selfish in their position of making Pride fit their adult interests.

“I want you all to understand that the fact that I am being forced to discuss this is genuinely pathetic and I am actually disgusted by the broader behavior of the left-leaning community, not because all of you are pedophiles but because none of you are stupid enough to understand the arguments that I am making,” Vaush explained at the beginning of the video.

The video, also uploaded on Monday, has over 110,217 views and 2,366 comments as viewers were equally riled up by his discourse on the topic and impassioned attack on what he feels Pride should be.

“In my mind, Pride should be an uncontroversial celebration of queer identity and queer history as a way of putting on a good face for the normies, giving people who are on the cusps of the community an entry into it, like an opportunity to dip their toes in, showing people what it is all about and being fun,” Vaush said in the video.

Vaush continued to explain his point of view by arguing that growing up and realizing you are queer at a young age can be a particularly isolating experience and anyone in their mid-20s has a much easier time with their own queer identity.

“This is why people who say that Pride isn’t for kids should unironically go fucking walk off into the woods of Nebraska. You are so selfish, so fucking selfish when you, an adult, try to tell everyone that Pride shouldn’t be for kids because you want to do adult shit at Pride. You are so fucking self-obsessed it makes me disgusted to be a part of this community to see takes like that taken seriously,” Vaush ranted angrily.

As he continued to expand his argument, Vaush discussed how kids first discovering their queer identity need support and acceptance more than anyone else from the queer community, which is why he believes Pride events should be safe for children and accessible to all ages.

“You are sacrificing the accessibility to kids in favor of some weird aesthetic that, I’m gonna take a hot take here, I am betting most of the people that are bitching about this on social media have never actually been to a Pride event,” Vaush continued.

The backlash on social media was intense as many users on Twitter spoke up about their thoughts on kink at Pride.

“Straights didn’t want us at their table. We made our own table. Now we’re being told to behave at the table we made so that the people who shunned us from their table can enjoy our table. Sorry, but fuck’em,” one user wrote.

On Twitter, reactions to Vaush’s tweets were divided among those creating memes out of his argument and those arguing against his points with their own take.

“Sanitizing the history of the LGBTQ+ community to make it easier for families to ‘access’ (honestly a horrible use of the term but we’ll set that aside) is bad, actually. Pride should be a celebration of all the ways the queer community has bound together and overcome stigma,” another user added.

For many, Vaush’s outlook on Pride as a family friendly event, while making kids feel comfortable enough to participate, serves to exclude other members of the queer community who would prefer to take part by celebrating their kink or dressing how they feel most comfortable.

The idea that Pride should appeal to families and those outside of the queer community also made many question whether Vaush is informed enough to speak on the matter at all.

“‘Pride should be queer-friendly’ is truly the single worst sentence I’ve had the misfortune of reading all week,” one tweeted in response to Vaush.