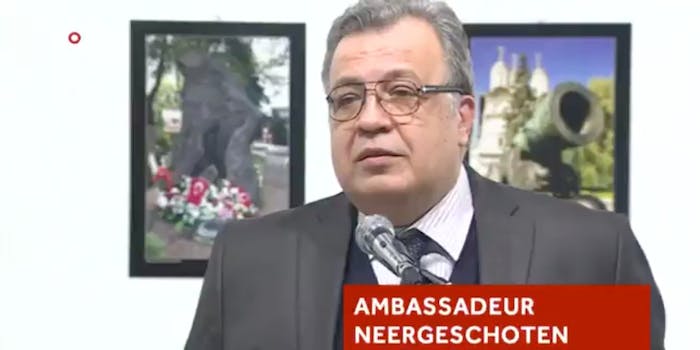 The shooting follows protests over Russia's support of Syria's president.

A gunman shot and killed Russia‘s ambassador to Turkey on Monday as media cameras captured the shocking moment of violence.

The ambassador, Andrey Karlov, was delivering a speech at a photo exhibition in Ankara when a gunman wearing a suit and tie fired at least eight shots, according to an Associated Press photographer who captured the deadly scene. Three bystanders were also reportedly injured.

AP photographer Burhan Ozbilici continued his work in the face of this. pic.twitter.com/mGdH37ZMei

Russian Foreign Ministry spokeswoman Maria Zakharova confirmed that Karlov died in the attack, which she characterized as “terrorism” in a statement.

U.S. State Department spokesman John Kirby said they were aware of the incident.

“We condemn this act of violence, whatever its source,” Kirby said. “Our thoughts and prayers are with him and his family.”

Attention now turns to how Turkey and Russia respond to the assassination.