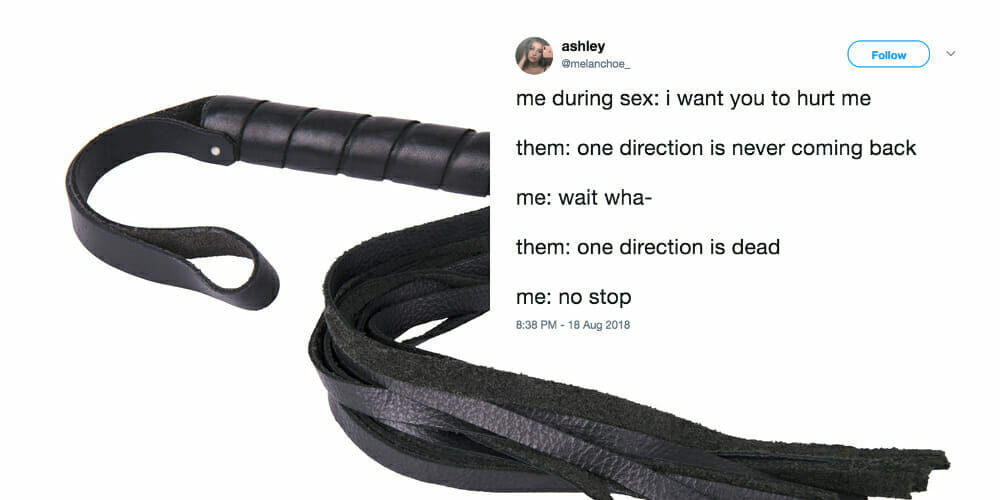 These ‘hurt me’ sex memes are hilariously painful

The latest Twitter meme is here to cause you pain.

The type of pain you experiment with doesn’t have to be physical, though, not at all. It can also involve humiliation or emotional play to help satisfy the partner looking to get off on pain or other feelings of that nature.

That’s what’s inspired the “hurt me” meme, which has been floating around on Twitter and making for some of the funniest (and sometimes far too real) jokes we’ve seen in quite some time.

The setup is simple. It’s meant to mirror one partner asking the other to “hurt” them, and the other person responds in a way that’s, comedically, “too much”. The other partner then says “stop,” because, well, it’s getting too heavy. Whether it’s rooted in gaming, music fandom, or life in general, there’s a lot of different ways to get in on this meme.

And as expected, there’s a variety of different ways to “hurt” someone, like telling them this super sad whale story.

Or this reminder that the year hasn’t gone as swimmingly as we’d planned.

Me during sex: hurt me

Them: we are in august and you haven't done anything right with your life in the whole year

Them: what about all of that new year resolutions you were about to do this year??? Where are they??

her: i want you to hurt me

him: the last release of an animal crossing main series game was in 2012 almost six years ago

Them: My Chemical Romance broke up

Okay, now this is going too far.

Me: I want you to hurt me

Her: You'll never get to save the quarian ark

Her: And it's going to be years before there's another Mass Effect or Dragon Age

her: sir this is a McDonald's

me during sex: i want you to hurt me

them: one direction is never coming back

them: one direction is dead

Of course, if you’re going to write one of these memes, always remember that pain in a relationship should always, always be consensual, especially if it’s a large component of your sexual play.

With that in mind, some good-natured memes poking fun at this dynamic won’t hurt anyone, ironically enough. Go ahead, enjoy the burn. Just make sure you’re being respectful of the lifestyle while you’re at it, too.