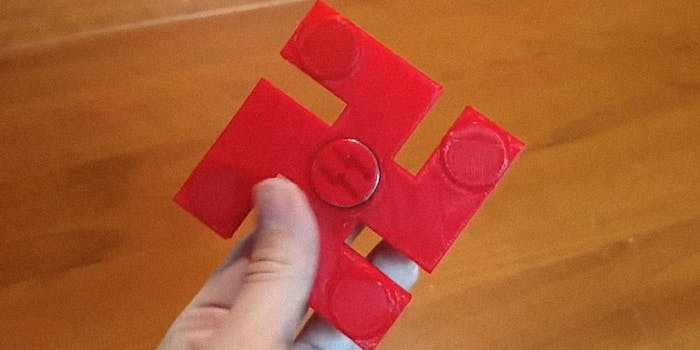 After the co-opting of everyman meme Pepe the Frog into a symbol of the white supremacist alt-right, it seems like any part of internet culture can suddenly become a racist emblem. Or, at least, be portrayed as one by trolls who thrive on panic and outrage. The latest victim of the trend: the humble fidget spinner.

Fidget spinners, the latest middle school craze, are small spinning toys that are supposed to help kids with ADD and autism. Instead, they’ve turned into a mainstream fad on the order of pogs or Pokémon.

Dank meme communities love making fun of fidget spinners, especially because spinners are associated with autistic kids, a favorite target for mockery in “edgy” online spaces like 4chan and Reddit. There, spinners are considered emblematic of everything that’s wrong with society, and they’re used as a metaphor for anything unlikeable.

These spaces are partially driven by adolescent rebellion, a distaste for anything popular, mainstream, and “normie.”  They’re also tinged with racist humor that may have been “ironic” at some point but is now sincere and pernicious.

Hence, this: a joke about a razor blade Swastika fidget spinner.

It’s just a one-off gag, but it tied in with another trend in meme communities. Memeheads, especially of the right-wing reactionary variety, thought it was hilarious when Hillary Clinton issued a statement against Pepe the Frog and the alt-right. They loved the mainstream attention and have been seeking to increase and duplicate it ever since. And the takeaway from the Pepe incident seems to have been: if we can trick the media into reporting that innocent memes are actually vile and racist, they’ll look stupid and we’ll be heroes.

The jumping-off point for the campaign to dupe people into outrage over racist spinners seems to be an anti-spinner piece in the New Yorker on May 12. In it, Rebecca Mead argued that the spinner is “the perfect toy for the age of Trump … It induces solipsism, selfishness, and outright rudeness.” She never said the spinners were racially charged in any way, but mentioning Trump and spinners in the same breath helped inspire a new alt-right “prank.”

On the gaming forum IGN, a seemingly conservative poster linked to the New Yorker piece on May 16. “Fidget Spinners are Racist Now,” he wrote.

When someone mentioned that the article never said that, the troll responded,

Soon, a more organized campaign coalesced on 4chan to drive the racist spinner narrative. William Hicks, at the conservative site Heat Street, posted a thorough breakdown of the effort.

There were threads on 4chan’s /pol/, the “politically incorrect” pro-Trump board.

And there were attempts to associate the spinners with white nationalist Richard Spencer, the guy who coined the term “alt-right.”

Not everyone on /pol/ went along with the campaign. In fact, many decried the anti-spinner campaign as “autistic”—ironic, given the subject matter.

Essentially, the pro-Trump camp, including /pol/ and Reddit’s r/the_donald turned it into one. Stunts like this, Bernstein writes, are “attempts by online communities to troll the media into reporting that unobjectionable or obscure symbols have deep-seated white supremacist connotations.” And they work because “[t]he reporting itself is then taken as proof by pro-Trump troll communities that the media will believe anything when it comes to Trump supporters and racism.”

It’s an annoying, childish game of making offensive statements and then mocking opponents who take them seriously for “missing the joke.” Pepe the Frog and the okay sign are not, historically, symbols of white power. But when they’re used that way, who can tell the difference?

With fidget spinners, though, 4chan’s /pol/ may have bitten off more than it can chew. Fidget spinners are already so mainstream and so associated with children’s mental health that rebranding them as Nazi propaganda is a tall order.