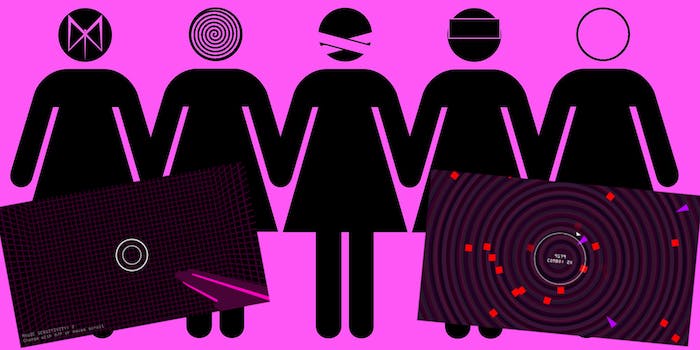 There are few kinks quite as popular online as hypnosis.

“To be frank, we think that games are so suited for hypnokink content that we were shocked that so few other games have tried to explore it like this,” one game developer, Nyx Gaming Priestess Nebula-06, told the Daily Dot. “Everyone we talk to about this project suggests fun ways to incorporate hypnosis into games, from [role-playing games] that corrupt the player, to games that use the player as a mechanic instead of as the controller.”

Meanwhile, Psychic Damage combines hypnotic sadism with traditional hypno spirals to put “masochism back in the masocore genre.” “Masocore” is a genre of games that are purposefully frustrating and extremely challenging. True to name, Psychic Damage puts players in a trance stance as they try (and, more often than not, fail) to place purple triangles in a white circle while keeping out red boxes.

Prior to play, Psychic Damage’s training segment trances the player into a hypnotic state that imprints pain and trance induction suggestions through red and purple “sigils” placed onscreen, respectively. The end result is a game that’s not just challenging but sadomasochistically enthralling. Put a red box into the circle, and you’ll feel real pain. Hit a purple triangle, and you’ll fall deeper into your trance state like a good, obedient pet.

Both games introduce new ways of thinking about video gaming as a space to induce hypnosis erotically, whether through explicitly adult themes or hypnotic gameplay mechanics that imprint new ideas onto the eager, willing player.

Nyx Gaming isn’t the only game developer exploring the relationship between gaming and hypnosis. Nowthatsstrategy’s Dropitz Deluxe uses rhythmic gameplay with flashing imagery to enact players into a trance state, and Vinyl Dragon’s Hypnoscreen offers player-mediated hypnosis through direct input with the mouse or spacebar.

Minty_da takes the concept one step further with the retro Super/Minigame Collection, which places players into a series of kinky hypnotic video games where the player’s identity is gradually (and temporarily) lost through the Dominant hypnotizer’s insistence. In one segment, the player is gradually entered into a trance state with the traditional (if not stereotypical) swinging pocketwatch. Priestess Nebula-06 calls Super/Minigame Collection “a major inspiration for us.”

Other games may not intentionally erotically hypnotize players but accomplish similar effects. SoundSelf: A Technodelic is a virtual reality mindfulness project hailed by hypnokinksters as “incredibly fetishistic,” even if unintentional on the developers’ part.

Hypnotic game development is a serious undertaking. Nyx Gaming develops all of its games with careful consideration for players’ mental safety. Each project is “tested as much as possible” and implements content warnings “so players know exactly what they’re getting into,” the developer says.

Players are responding positively to what Nyx Gaming creates.

“Soon,” Priestess Nebula-06 said. “Nyx Gaming shall either succeed at our secret goal of taking over all online leaderboards with our army of dedicated hypnosluts, or just keep making fun kink content. One or the other, we haven’t decided yet.”