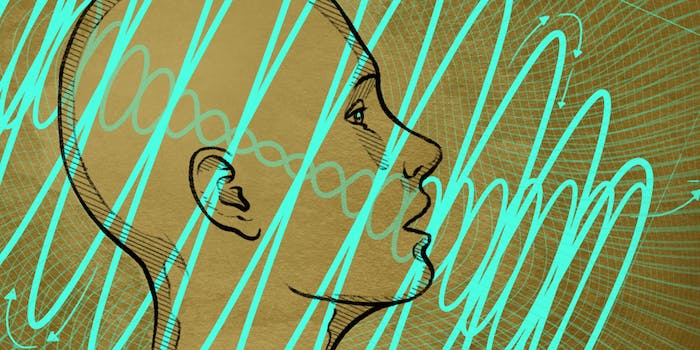 Created by mindfulness-based development studio Andromeda Entertainment, SoundSelf invites players on an “exhilarating journey into altered states of consciousness, powered by your own voice.” Players relax and gaze into an endless “hypnotic world,” holding tones while the game creates harmonic music and strobing lights across a dynamic tunnel. Part procedural hypnosis experience, part meditative practice, and part psychedelic trip, the VR game is built off the idea that “the drugs of the future will be computers [and] the computers of the future will be drugs.” But that’s where things start getting kinky.

“Dim the lights, turn up the volume, and let your voice guide you through an odyssey of color and sound that dissolves your mind in a bath of ecstatic sensation,” the game’s Steam description teases.

Now that SoundSelf is out, what’s the verdict? Sex writer Kate Sloan looked over the game’s marketing and pointed out its ambiguity. On the one hand, Sloan identified many common hypno kink tropes in the game, from its emphasis on sensory deprivation to the claim that the game “dissolves your mind,” which she says commonly appears in hypnodomme content. She says the game “does seem very fetishy,” although she notes this could just be pure coincidence.

“I think the trouble is that probably a lot of people feel some kind of sexual frisson about hypnosis but haven’t explicitly identified [or] admitted that to themselves, so the game might feel exciting in a vaguely sexy way,” Sloan told the Daily Dot. “A lot of hypnokinksters fetishize really traditional hypno tropes which the general population also knows about from TV shows and movies and such, so it can be hard to identify what’s actually fetishy versus what’s just the typical person’s half-baked understanding of how hypnosis works.”

“The media for this game is incredibly fetishistic to me. I mean, like, very, very porny. The techno themes, the twisting colors, the layered, blissed-out voices,” she said. “Did the developers intend this? I can’t imagine that they weren’t at least aware of the potential for it to be kinked.”

In development, SoundSelf was primarily thought of as an “intimate” and “sensual” experience. One playtester for an early SoundSelf build said her session “was a lot like self-pleasure,” which Arnott credits with how the game physically engages the player.

Regardless of whether Andromeda meant to create a kinky hypnosis game, SoundSelf has endless possibilities for sexual expression, so long as it scratches the right itch.

“Honestly,” she continued, “as tempted as I am to buy it, the fact that I can’t play it in silence / privacy is a bit prohibitive for me—there is literally no situation where I play this game and don’t get uncomfortably turned on.”