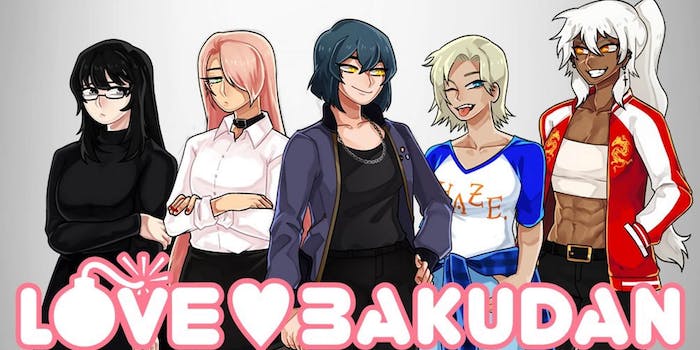 It's a comedy/drama about girls 'falling in love and on top of each other.'

There’s nothing better than reading adult books. Throw a bunch of lesbians into the mix, and you get something even better: Love Bakudan, an adult yuri visual novel recently backed on Kickstarter.

Love Bakudan stars players as Haruka Mishima, a 23-year-old lesbian who receives an inheritance for her grandmother’s bookstore in Akiyama, Japan. It’s not just any store. Her grandmother ran Bakudan Books, an adult bookstore within the town’s red-light district. Now that her smut-peddling grandma has passed, it’s Haruka’s turn to run the store, so she returns to her hometown to pick up the family legacy and “mix business with pleasure.” And yes, that includes “girls falling in love and on top of each other.”

“Haruka has to romance a particular girl of choice to be able to sleep with her, but the girls that you don’t pick may be messing around with each other on the side,” developer Noodletub Games told the Daily Dot. “For these side pairings, we’re considering adding in CGs if funding permits it, but we’d really love to be able to expand on these just to add more NSFW content into the game!”

Noodletub Games is a Vancouver-based queer development studio led by Cat and Blair, Love Bakudan‘s writer and programmer, respectively. After the two met online, they created The Ghost of You, a December 2018 yuri horror game involving “romantic conflicts, personal demons, and a song so haunting it warps the mind.”

“As both of us know how important gender identity and transitioning is to so many different people, we’d like to be more educated on people’s experiences and preferences over the coming months of how to portray this topic well,” the developer said.

“The outpouring of love and support in general has been so fulfilling, we really can’t thank everyone enough for their retweets, posts, just thinking about pledging and more,” Noodletub Games said.

Love Bakudan is set for release in September via Steam and itch.io. Interested readers can still back the game on Kickstarter in exchange for special prerelease rewards.