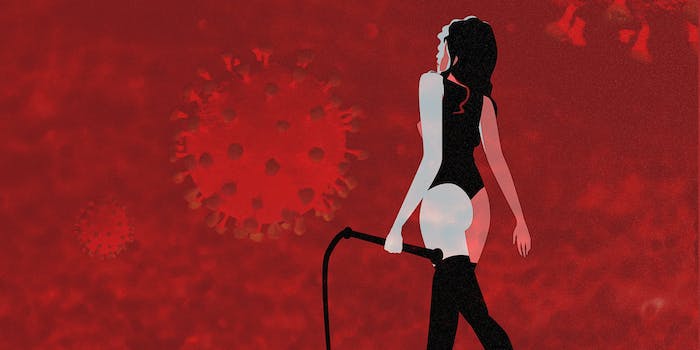 Since COVID-19 lockdowns began in March, KinkD has experienced a 39.2% rise in average monthly active users, the report notes. Users are not just flocking to KinkD in droves; they’re also spending more time on the app. Daily usage has jumped by over 50%.

Among the top 10 American cities using KinkD, New York City clocks in first with just over 13,500 average monthly active users, followed by Los Angeles sitting at approximately 13,300. Miami follows with 11,200, followed by Houston and Atlanta at 4,700 and 4,600 thousand. “The report also points out a rise in user engagement on the app in these cities, as users tend to spend a long time than what they did before the pandemic,” KinkD notes in its press release.

The kinky dating site attributes its growing popularity to “feelings of stress and loneliness elevated” by the coronavirus pandemic.

“[Modern technology] provides a creative way to fill the void caused by physical distancing on social activities, leisure, and sex,” KinkD co-founder John Martinuk said in the press release. “But I think the recent surge in technology-based social approach is just a temporary coping strategy, once this pandemic end, we still hope the usage of this approach may decrease in favor of in-person, partnered interactions.”

The COVID-19 lockdown has impacted regular kink practitioners too. Lange’s clients experienced “much more extreme” fantasies during the height of New York City’s outbreak. Some of that has faded as the city’s restrictions have lifted, but others remain just as intense. Whether these intense fantasies were caused by the state of the world or “idle hands,” Lange said, she isn’t quite sure. But she definitely experienced some of this herself as she’s felt her own fears and anxieties “really starting to pile up on themselves” during lockdown.

“People are really capitalizing [on eased lockdown restrictions in New York] and they’re trying to strike while the iron is hot because they’re unsure as to what’s going to happen going forward and they’re also so sick of what just happened,” Lange told the Daily Dot. “The entire fucking world experienced a massive, massive, massive shift in power dynamics. And when people are feeling like they have no control, they start doing ‘desperate measures.’ And that’s not to say that BDSM is a desperate escape […] but you see that peoples’ behavior in general is like, ‘I need to regain some semblance of control in my life, and this is a really healthy way to do it.'”

“Granted, these types of things take time to build back up. Most people I’ve spoken to don’t even know that it’s happening,” Lange said. “Or they know that it’s happening, but they’re still not quite sure if it’s safe, what the thing is like. I’ve spoken to other professionals that are like, ‘I would really love to go, but I don’t know if the guidelines are actually going to be followed or if it’s going to be a free-for-all.'”