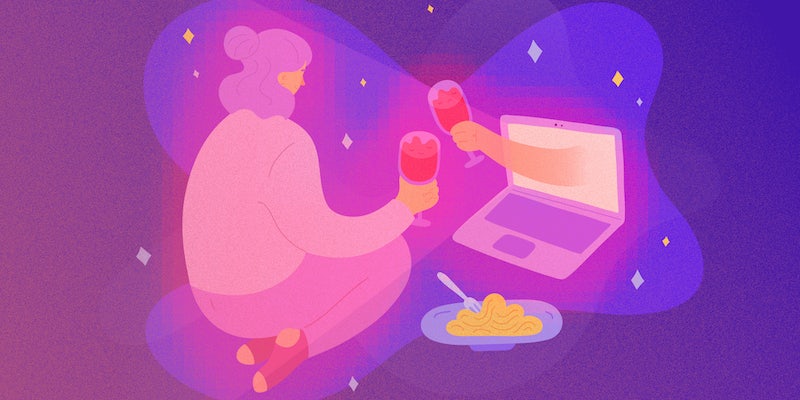 Pre-COVID, the Wish was more of a novelty than a staple in my bedroom. It felt pretty nice on my junk and had plenty of vibe features, and its internet-of-things approach gave it a niche appeal. But it only felt pretty nice. Everything that felt good about the Wish was done way better by my Hitachi Magic Wand, and if I wanted to have sex with one of my friends, it made more sense to hook up with them in New York City or at a convention or something. So why bother?

Well, since quarantine began, I can count on one hand how many dates I’ve been on (one) and how many times I’ve had sex (four?). The Wish is one of the few ways I can feel physically connected to another person sexually. Isolation, loneliness, and touch starvation all heighten the experience of having someone miles away—at times a near-stranger I only met during quarantine—control how and where I feel pleasure.

But there’s a parallel issue. I’m not just a sex haver; I’m a sex worker with a moderately successful OnlyFans. This was supposed to be an enormous year for my career in queer indie adult film. After my first successful professional shoot in late 2019, I wanted to plan shoots with my sex worker friends near and far across the year. When the coronavirus led to a pandemic, that changed. Out-of-state travel and, eventually, local travel were out of the question. I went from a prospective porn performer to a solo creator primarily reachable on OnlyFans. Like many things, life was put on hold—and so was my career.

That is, until I decided it was time to fetishize social distancing.

Moe Rose was one of those civilians whom we sex workers call “safe.” When we first met, she was friends with a number of sex workers and chill with their line of work. We became fast friends and had some pretty wild adventures together, including (but not limited to) an alien strap-on and a furry-themed ovipositor. So when Rose started doing online sex work during quarantine, I was overjoyed. She seemed like a great fit for the industry, in no small part due to her futch, tattoo-covered aesthetic.

Right before quarantine, Rose moved away, and I found myself lonely for her physical presence in my life as the new normal took hold. But when I realized I wanted to do a shoot with my We-Vibe, she struck me as the perfect co-star. We already had great chemistry, so why not film it over Zoom?

The clip, which is going through editing right now, features a bare-minimum plot about me getting a We-Vibe Wish and inviting Rose to give it a whirl. Most of it is improvised around a loose outline that boils down to “flirt with Ana and make her squirm until she nuts.” But instead of trying to create a fantastical, cinematic experience that plays into the viewer’s wildest fantasies of two girls turning each other on, we simply recorded our Zoom video call and patched in high-quality audio output. The end result feels voyeuristic, as if the viewer gets to check out what it’s like when Rose and I sext each other.

Initially, Zoom was just an avenue to make the clip work. But as the shoot came together, Zoom became an important avenue for the video itself. The recording, complete with all the awkward background noise and delayed social cues that come with Zoom, became a portrait of our times. It captures what it’s like not just to have queer sex but to do queer sex work with another queer sex worker while social distancing. It’s the eroticism of online connection, the fetishization of internet-of-things technology, and a portrait of the sexual energy innate to a service that has kept us connected with our friends, lovers, and fellow queers for half a year.

When Rose and I showed off the first teaser trailer for our video, it turned some heads. You don’t need to meet in-person with another sex worker to shoot. You just need to create content that meets the viewer’s sexual fantasies. Those fantasies may be as simple as two queer women still flirting, fucking, and coming from the safety of their own bedrooms during a global pandemic.