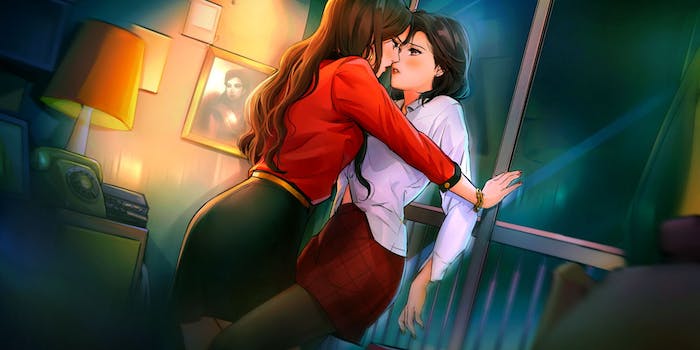 The 1980s marked a historic time of economic prosperity for Hong Kong. Cinema soared, and the white-collar workforce brought enormous real estate prices to match. But what was it like to be a queer woman at the height of the decade? Nearly 40 years later, two developers are exploring lesbian love and desire in their upcoming adult game set in Hong Kong.

The visual novel, A Summer’s End—Hong Kong 1986, tells the story of Michelle, a young urban professional who happens to meet a “free-spirited” and “unconventional” entrepreneur named Sam. The two women come from different socioeconomic classes, and A Summer’s End will look at how they “reconcile their differences” and “understand and express their sexuality.”

A Summer’s End isn’t just a compelling romance story; it’s also unapologetically sapphic. The adult game will explore lesbian eroticism through explicit sexual content by and for queer players. To understand a lesbian relationship, Oracle and Bone’s co-founders Charissa So and Tida Kietsungden argue, players have to also embrace lesbian sexuality in its fullest extent.

Kietsungden and So, the game’s artist and writer, respectively, always wanted to create a narrative-based game around lesbian romance. New wave Hong Kong and Taiwanese ’80s cinema became a major inspiration for the adult visual novel. These films were rife with themes around “cultural, intergenerational, and political conflict,” So and Kietsungden told the Daily Dot.

Lesbianism, along with the ’80s itself, became the “perfect allegory” for similar themes in A Summer’s End. While the game’s story draws on both creators’ personal experiences, the two heavily researched life in Hong Kong during the decade to present a setting that felt as authentic as possible.

“We interviewed personal contacts to better understand the social climate of Hong Kong and Asia in the 1980s. We also looked to Asian cinema to help us understand how lesbianism and homosexuality was understood and presented by the general media at the time,” So and Kietsungden said. “It came to us as surprise when we found that a number films from this period presented queer identities frankly without derision.”

Thai lesbian author Benjanun Sriduangkaew was initially excited yet skeptical of A Summer’s End, until she realized the adult game was being developed by and for queer Asian women. Sriduangkaew, a former Hong Kong resident, admits the ’80s is “a bit before my time.” Nonetheless, she praised the game for depicting a recognizable vision of the city that avoids “an orientalist, exotified vision” white creators tend to depict in their works.

“I’m also pleased that the characters are adult professional women rather than teenagers, because a lot of Asian media depicts lesbianism as something you grow out of,” she told the Daily Dot. “I look forward both to how it explores the city and how it explores sensuality, and how it combines both to make something unique.”

The games industry is no stranger to conversations around representation. During the 2010s, queer creators and developers of color led conversations about how their lives are depicted in games by creating new content by and for their own communities. Brianna Lei’s 2017 visual novel Butterfly Soup explores a group of queer Asian-Americans who bond over their love of baseball and LGBTQ identities.

But A Summer’s End is different. It’s not just a lesbian visual novel that takes place outside of North America; the developers consider adult content as a fundamental part of representation. To fully appreciate Michelle and Sam’s story, players have to experience the adult game’s sex scenes.

“Adult content was something we had in mind since the beginning of development for A Summer’s End. We felt that it was thematically important for the story and for sapphic representation as a whole,” the team said.

As with all marginalized representation, simply showing one’s voice can lead to new art by and for a community.

“There’s a very hungry market for narratives that come from within the culture, because the white queer experience and the Asian queer experience can be enormously different,” Sriduangkaew said. “And even when white creators try to include characters of color, the result is most often a paint job over a white character—what I call literary colorface—rather than a culturally true portrayal.”

A Summer’s End launches on PC, Mac, and Linux via Steam and itch.io on April 23. Players can download the game’s free adult patch to enjoy A Summer’s End as it was fully intended.