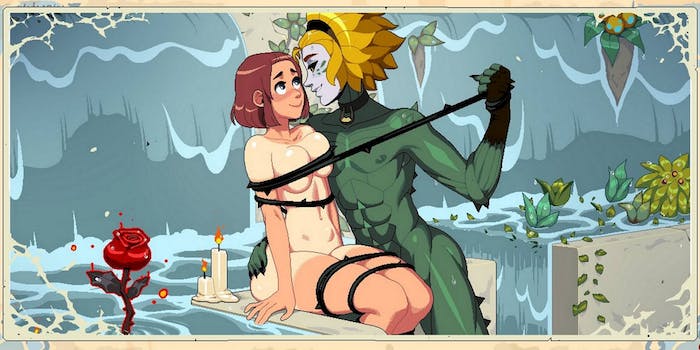 Breed your own monsters. Then breed with them.

Team Nimbus’ Cloud Meadow tasks the player with farming crops and raising monster boys and monster girls on a frontier village called Cloverton. Players incubate and raise catgirls, dragons, harpies, lamia, and demons, among many others, and then let them breed together. There are also plenty of nonplayer characters—both human and anthropomorphic—to meet throughout the game.

Cloud Meadow entered Steam Steam Early Access this month. Publisher TinyHat Studios provided the Daily Dot with a key to preview the game. For more information on whether you should pick up Cloud Meadow now or wait, read on.

In Cloud Meadow, humans and sentient monsters coexist thanks to the Union, a governing entity spread out across various magic floating islands. Cloud Meadow stars players as an academy graduate sent by the Union to serve as a farmer on a Frontier settlement named Cloverton. Throughout Cloud Meadow, players must grow crops, breed monsters, and travel through dungeons while fighting feral monsters. Domesticated monsters are readily available for having sex, although players can meet, hook up with, and marry various human and anthro monster party members throughout the game. All 10 nonplayer companions can be married to the player at the same time.

Cloud Meadow’s artist and project lead S-Purple had a controversial departure from Breeding Season. Harista-PipeBomb, the creator of Breeding Season, accused S-Purple of walking away with Patreon money and declining to give the development team the rights to his assets. S-Purple responded to the allegation by claiming the project was unprofessionally managed from the start.

By the time he departed, S-Purple said other project members either left the game’s development team or were in the process of doing so, leaving solely Harista-PipeBomb to create the game.

“Cloud Meadow is not Breeding Season, but it will hopefully be the spiritual successor to what could have been if bad management and incredible laziness had not interfered with production at the highest levels of our development team,” S-Purple wrote.

Cloud Meadow’s Steam demo introduces players to the basic mechanics they can expect throughout the full game. Players walk around town, meet the game’s cast, learn how to farm and incubate monsters, and play through a dungeon segment complete with an ending boss battle. Along the way, players can unlock sprite animations detailing the game’s various sex scenes. This includes straight, gay, and lesbian pairings, and many of them stray far from sex. In one scene, the female player character uses a strap-on with Fio, a scrappy straggler living on the player’s farm before her arrival. When the male player character has sex with the powerful dragon guard captain Goldra, she tops him over a barrel and uses her breasts to stroke his cock until he orgasms.

Cloud Meadow is available on Steam Early Access for $19.99. The game’s full release is slated for the first quarter of 2021 and will feature more animations, quests, and dungeons, among other features. The game’s subscribers on Patreon receive regular playtesting builds with more story and gameplay mechanics added in ahead of time. Playtest releases do not feature Steam Cloud saves and other Steam features, but pledging for the game on Patreon is much cheaper in the short-term: Patrons can access a pre-release copy for just $2 per month, and after the game goes gold, any patron past or present will be given a DRM-free version of the full game.

If you’re interested in sampling Cloud Meadow before putting any money down, head on over to itch.io to download the latest public demo.