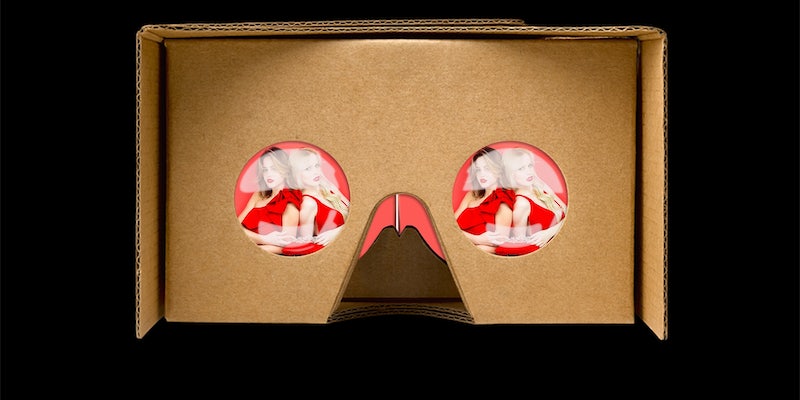 First you’ll need to get yourself a VR headset. You can snag a basic Google Cardboard headset for around $20, but if you want to splurge there are more durable and comfortable models available. Just make sure whatever you buy is compatible with your smartphone. We also suggest buying some good headphones, both for privacy reasons and to get the full emersive experience from your vidoes. Once your set up is ready, it’s time to find your favorite app.

Just load the video you want to watch, hit the VR mode icon that looks like goggles, and put the phone in your headset. While each mobile device has its own browser, in our tests Firefox worked the best for watching VR scenes. It loads fast, has great privacy features, and makes it easy to sync between your phone and computer. That comes in handy when you don’t want to enter your passwords on multiple devices.

Given how remarkably sex-negative Apple is we’re surprised this app is still allowed on their store, but that doesn’t mean we’re grateful. Try this app with the OhMiBod and see fireworks.

If your favorite site has its own proprietary app, it makes plenty of sense to take advantage of it. Especially when that app is SexLikeReal’s. This one isn’t just for smartphone users, with support offered for PC, Android, Quest/Go, and iOS (kinda). With the SexLikeReal app you can stream everything on the site without downloading, access your library from your VR headset, and more. Don’t have a membership? That’s okay. There are 24 full free VR scenes to try out on the app.

If space is an issue but you don’t want to waste your bandwidth Play’a supports streaming off of local network servers. When you use it on VR Bangers, VRBGay, VRBTrans you get an extra “jump to the pop shot” feature along with a “Panic Mode” that changes what’s playing if someone walks in on you. If you want to do it, Play’a can probably handle it.

Editor’s note: This article is regularly updated for relevance. The Daily Dot may receive a payment in connection with purchases of products or services featured in this article Click here to learn more.