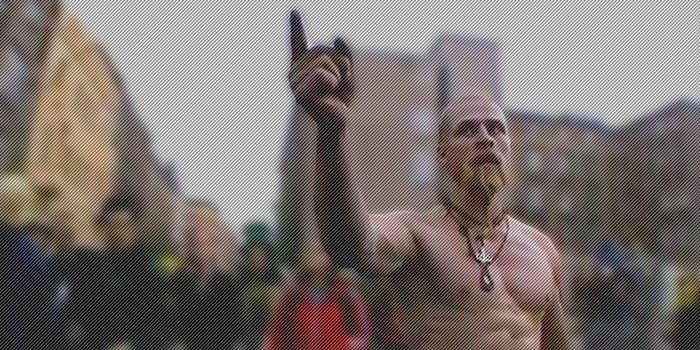 A German court rules against Matthias Fritsch, the man who filmed the original Technoviking video and started a meme.

In January, one of the greatest Internet stars of the past decade sued the man who made him famous.

Months later, a Berlin court has finally delivered its verdict, one that neither man is likely to be entirely pleased with and will likely have important implications for the future of generative and remix culture, especially in Germany and Europe.

The Technoviking character was born at a 2000 techno parade in Berlin, when a still-anonymous man walked into the frame of Matthias Fritsch’s camera. The blond-haired giant looked like he was pulled straight from the Scandinavian dark ages, and Fritsch followed him, first as he stopped a drunken party goer from groping a woman, then as he led a procession of followers down the street in a mighty display of spontaneous techno dancing.

Seven years after filming the video, Fritsch finally uploaded it to YouTube. The man shortly became an Internet legend. He was dubbed the “Technoviking.”

Once the Technoviking made that leap to the Internet, his likeness was the world’s to play with, whether he wanted it or not. He starred in remixes of the original video and image macros (including a fan-made homage in Grand Theft Auto), and even saw his likeness became the motif for an entire line of Cafepress products. Meanwhile, once Fritsch’s original video hit 4 million views, he reached an advertising deal with YouTube and started to receive checks.

This was all without the Technoviking’s permission. He was not pleased.

In 2009, his lawyers sent a cease-and-desist letter to Fritsch, who immediately stopped taking payments from YouTube.

Three years later, the Technoviking and his lawyer decided to sue Fritsch outright. Here’s what Fritsch told us about the lawsuit earlier this year:

“I am being accused for creation and publication of images connected to the Technoviking, therefore infringement of personality rights. They also say I am earning a lot of money by that. They argue that [I] gave him the name Technoviking, create 3D characters, comics and more to constantly increase the popularity in order to market Technoviking and therefore cause damage to the protagonist.”

On June 11, after months of back and forth in the courtroom, including a tossed out settlement deal, the court finally delivered its verdict. (If you know German, you can read it here.) Here are the basics of the judgment, according to Fritsch:

1) Fritsch cannot display video or stills of his video in public if they show the Technoviking in a recognizable way. Even pixelizing the Technoviking’s face is not adequate, the court ruled, because he could still be identified.

2) Fritsch must pay 56 percent of the trial costs, and the plaintiff 44 percent.

3) Fritsch must pay the €8,000 he directly made from the original video on YouTube.

4) The court ruled against the plaintiff’s claim for €10,000 in compensation for “pain and suffering.”

5) Additionally, Fritsch has to pay €1,500 in legal bills for the Technoviking’s first lawyer three and a half years ago.

Here’s the good news: The judge’s rulings only affect Fritsch, and not the generative culture surrounding the Technoviking worldwide. Here’s how the German law blog iRights put it:

Above all, the judgment demonstrates how limited the resources are offered by the law in Internet phenomena. Although now probably the original Technoviking video must be changed and distorted by the artist, everything indicates that the video – and especially the thousands of adaptations – will continue to be found on the net.” (Translation via Google Translate.)

Fritsch told the Daily Dot he was not pleased with the verdict. While he said he supports a person’s right to privacy, he also firmly believes the video was a work of art and that, by forcing him to pay back his YouTube earnings, the court is essentially saying an artist cannot profit from their work. He said he’d like to take the legal fight to a higher court, but that will put him “even deeper in debt.”

The mighty Technoviking never showed up in court, Fritsch said, preferring his lawyer to serve as proxy for the entire process.

“I really think it is a big pity that the plaintiff never tried to reach me before sending a lawyer and also never reacted to my request during the last years of having a personal conversation,” Fritsch said. “He could have gotten more out of this situation by solving it on a more human level.”

The Technoviking saga isn’t ending with that €15,000 in fees and compensation Fritsch owes, however. Fritsch is making a documentary about the case and launching an Indiegogo campaign to fund it. He’s seeking €10,000. That is, it’s worth noting, €5,000 less than he owes the Technoviking.

He says the documentary will work within the confines imposed by the court.

“By donating to his film,” Fritsch writes on the campaign’s homepage, “you will not only help keep the Technoviking meme alive, you will help shape a new legal framework to protect artists and Internet users around the world.”

Correction: This article originally stated that the Technoviking appeared in an official version of Grand Theft Auto. We regret the error.