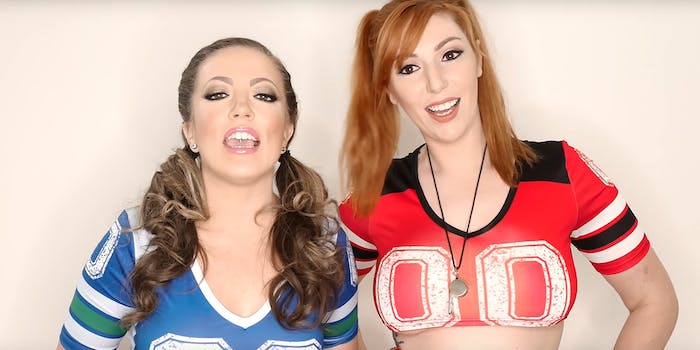 When the Patriots fell behind 28-3 at the beginning of the third quarter of Super Bowl LI, it wasn’t just fans of New England who were crushed.

Lauren Phillips and Carmen Valentina were watching the game as well, and they were pretty down.

“I was literally texting Carmen ‘It’s not happening, it’s not gonna happen.’ I was really bummed,” Phillips said. “I really thought— I had done all the research—I thought the Pats were going to win.”

“I have been wanting to do Team BJ for a few years,” said Phillips “ever since I saw the one Sarah Jay and Siri [did for Germany winning the World Cup]. I told Carmen that we have to do Team BJ together. It’s been one of my biggest goals slash dreams.”

Phillips wasn’t about to throw her the opportunity to chance. “We did the research. We looked at stats, players, games won and lost, [points scored].”

Phillips and Valentina, who have been close friends for the past four years, picked four teams to win it all as part of the challenge. In succession, though, the Chiefs, Cowboys, and Packers were eliminated. That left New England. When the Patriots handily beat Pittsburgh to make it to Super Bowl, their story began trending online.

Together, at the kick-off of the Super Bowl, the duo had half a million followers. But the Falcons impressive start to the game left it looking like Team BJ wouldn’t go down (and neither would Valentina and Phillips).

Then the Pats started scoring, and one of the most amazing moments in Super Bowl history occurred.

“That Julian Edelman catch! The foot was in his face, he was falling down, I was like how did you catch that?” Phillips recalled, still in amazement.

“Our goal is completion” for everyone, Phillips added.

Phillips and Valentina both say they have never done anything of this magnitude before, but they aren’t intimidated.

“[I’ll] probably use a ball gag to work out those jaw muscles,” Valentina said about the weeks leading up to the event.