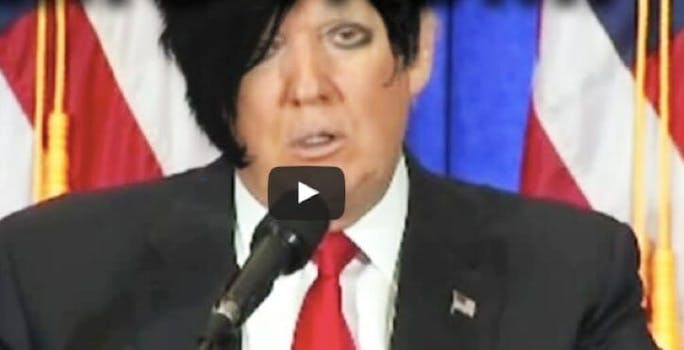 Emo Trump takes the words right out of Trump's mouth, and makes the into an emo song that would be perfect in the mid-2000s.

Some of the funniest commentary on the 2016 election and the rise of Donald Trump came from the YouTube channel Super Deluxe, where genius video editor Vic Berger IV skewered everything from the presidential debates to Trump’s inauguration. Super Deluxe hasn’t let up on Trump since he became president, either. This week, they dropped a new video that turns the most self-pitying moments from Trump’s speeches into a perfect early 2000s emo song.

“I am being viciously attacked,” “Trump” sings, with a Taking Back Sunday whine. It’s both a spot-on genre parody and a spotlight on Trump’s victim complex. Like a rejected high schooler, the president frequently complains that the world is out to get him and people just don’t understand who he really is, and this song doubles as a supercut of those moments.

It’s also a sequel of sorts to Super Deluxe’s original Emo Trump video, which was released in February and took its lyrics verbatim from Trump’s Twitter account.

Trump is reportedly so obsessed with the appearance of toughness and masculinity that he looked down on press secretary Sean Spicer for being portrayed by a woman on Saturday Night Live.

I wonder how he feels about being called a sensitive emo boy. Probably not too pleased, considering his admission—also seen in this video—that he’s been “thin-skinned from day one.”