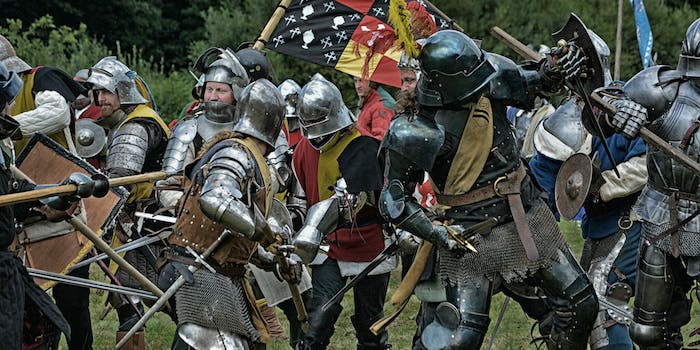 A new meme is taking gendered stereotypes to ridiculous new heights. Everything from boys being violent, unruly thugs to girls being overemotional, boy-crazed gossips is on display with the “Boys’ Sleepovers vs. Girls’ Sleepovers” meme.

The earliest known use of the format was by Twitter user @Borchmore, who posted a picture of what appears to be teenage boys wrestling at a sleepover in May.

Girls sleepover: "Omg I think Brad likes me, I saw him looking at me during Math class!"

That tweet only received a few likes. It wasn’t until a few weeks later when Reddit user Sloopy_Tom posted their own version, showing what appears to be a Pagan ritual, that things really took off.

I’m still haunted by those nights from dankmemes

The post has since received nearly 40,000 upvotes and its over-the-top portrayal of what boys’ sleepovers look like caught on.

Sorry for not posting for ever . . . . . . . #memes #meme #boysbelike #boyslockerroom #boyssleepover #people

Girls sleepover: “I hope we tell scary stories and watch a movie”

It wasn’t long until people pointed out that boys’ sleepovers don’t have to be violent. They can also be sexy.

Or violent and sexy?

Some people chose to take things in a more surreal direction.

Some chose to turn the meme around and express that girls can also be crazed mass murders.

The meme is most likely a direct descendant of the “Boys’ Locker room” meme that became popular around the same time.

At least here.. from memes

It’s also similar to the “When Teacher says ‘Get out of class'” meme that was somewhat popular at the end of 2018.

These kinds of “men and women are starkly different” jokes have been around since pretty much the beginning of time. While many of these memes are indeed funny, they also illustrate how far a society, that is attempting to evolve past age-old ideas about gender, really has to go.