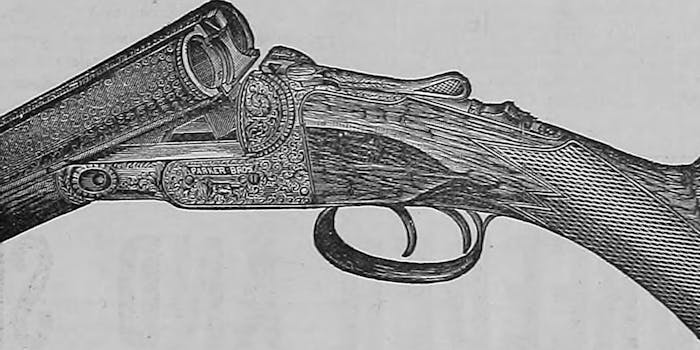 The buckshot history of double-barreled shotguns in video games

From Doom to Mad Max, the double-barrelled shotgun been has an essential weapon for survival.

A double-barreled shotgun is like the first and last word in an argument that leaves a speechless, devastated person in its wake—most likely in chunks all over the floor.

As part of an ongoing series, the YouTube channel Ahoy has producing a stellar video that investigates the real-life history of the weapon and how it’s been incorporated into video games.

Linking the real-world history of the weapon and its video game counterpart will be problematic for some. It implies a level of correlation between video games and real-world violence, a link that has been fiercely debated for quite some time. Comparing the basic principles behind how shotguns operate in reality and how they operate in video games, in regards to best use scenarios and tactics, however, doesn’t seem outrageous.

The double-barreled shotgun is devastatingly powerful, frustratingly so if you happen to be on its business end during a multiplayer match. Gamers gripe about “shotgun whores” because they think shotguns require no skill whatsoever. It’s an easy illusion to maintain if you keep turning the corner to come face-to-face with the same player holding the same double barrel and immediately find yourself starting at the respawn screen. If that player misses with his first and only shot, however, they’re dead. Check around 6:20 in the video, where whoever is doing the video capture manages to miss an AI target twice successively.

Unless the wielder of any kind of shotgun is cool enough to make sure they’ve targeted center of mass, a headshot from any other type of weapon will put them down. And in competitive circles, players can be good enough to land those shots with a no-scope pull from a sniper rifle.

The shotgun’s distinctive profile and blunt, ease-of-use made it a weapon of choice for early game developers. Its appearance in Doom II, as the video notes, is legendary.

Ahoy has also put together videos for other ubiquitous video game weapons like the AK-47, as well as weapon guides for specific games like Call of Duty: Ghosts and Titanfall.