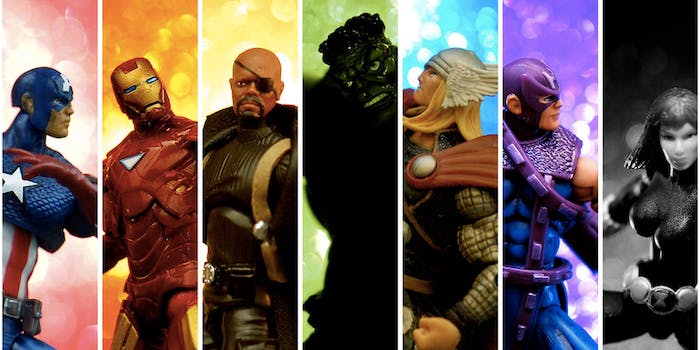 Could Marvel be setting up a civil war plot for ‘Avengers 3’?

Here are three reasons it could happen.

“Civil War” is one of the most iconic storylines in Marvel comics history, and fans have been debating for years over whether it’ll eventually make it to the big screen.

The series pits Captain America and Iron Man against each other, not in a physical showdown but in a battle of ideologies. Simply put, Tony Stark supports a “Superhuman Registration Act,” which requires all U.S. citizens with superpowers to register with the government. Steve Rogers is against the idea, stating that superheroes have a right to privacy. That’s a simplification of a pretty complex storyline, but as you can probably tell, this division between the two greatest Avengers spreads to include the entire superhero community, leading to… well, a civil war.

Of course Marvel Studios is never going to do a direct adaptation of “Civil War.” It can’t. The storyline would require far more scope than a single two-hour movie could ever allow, and besides, there are too many characters, many of whom are currently owned by other studios. Spider-Man is the most obvious one, with Sony now planning to extend the character’s franchise and his various enemies. The only realistic option for a direct “Civil War” adaptation would be a Game of Thrones-style miniseries, which would require a new canon from the current Marvel Cinematic Universe, and wouldn’t be as cost-effective as a single blockbuster movie release.

If Marvel Studios’ recent output is anything to go by, the best hope for a “Civil War” movie is a vague adaptation that takes a few aspects of the story and then builds a new concept around them. This is pretty much the way things went for Iron Man 3 (based on Warren Ellis’s “Extremis” story arc), Captain America: The Winter Soldier, and others.

Until recently, most of the debate about a potential “Civil War” movie was moot, because the Avengers franchise could still go in virtually any direction. But following the game-changing events of Captain America: The Winter Soldier, there are now lots of world-building details that could point to “Civil War” for Avengers 3, once Ultron has (presumably) been defeated in the second Avengers movie next year.

Avengers 3 is likely to be the point where Chris Evans and Robert Downey Jr. bow out of the franchise to make way for new characters, and from a practical standpoint “Civil War” would be a great way to get rid of Iron Man and Captain America’s central roles. But aside from that, there are plenty of in-universe reasons why “Civil War” is now a genuine possibility.

Everything is public now

From the perspective of the Marvel Cinematic Universe as a whole, the most important event of Captain America: The Winter Soldier was the dissolution of S.H.I.E.L.D. and the subsequent Edward Snowden-style leak of all its classified documents.

On a personal note for characters like Black Widow and Hawkeye, this means they are now public figures rather than anonymous government operatives. The general public, meanwhile, has just had a bombshell dropped on their heads: For decades, governments across the globe have been conspiring with S.H.I.E.L.D. to hide all sorts of extraterrestrial and superhuman threats from the public, and have probably detained thousands of people without trial. Not only that, but S.H.I.E.L.D. allowed itself to be infiltrated by the evil HYDRA organization, who “shaped the century” by organizing various covert assassinations and spy missions to topple governments and manipulate history to their own ends.

Looking at it this way, it wouldn’t be much of a stretch to imagine a lot of people demanding more transparency from the government, particularly when it comes to superpowered beings. And as we know from Marvel’s Agents of S.H.I.E.L.D. TV series, S.H.I.E.L.D. spent years compiling a database of possible superpowered people around the world—which was presumably made public at the end of Winter Soldier.

A “Civil War” movie wouldn’t need to introduce the full pantheon of canonical characters to create a situation where “normal” humans feel intimidated by the growing number of superheroes. In the Marvel Cinematic Universe, this is already happening. All they’d have to do is throw in a few cameos from minor Agents of S.H.I.E.L.D. characters or mention someone from S.H.I.E.L.D.’s now-defunct superhuman list. Plus, Avengers: Age of Ultron will introduce Quicksilver and Scarlet Witch, a pair of characters whose powers are far more “super” than the comparatively sensible and science-based abilities of established heroes like Captain America and the Hulk.

For “Civil War,” you need a Tony Stark who is willing to put his full support behind the Superhuman Registration Act. While the Tony Stark of Iron Man and Iron Man 2 was relatively apolitical, recent developments in the Marvel Cinematic Universe could very easily change that.

Tony didn’t appear in Captain America: The Winter Soldier, but he was alluded to on two occasions. First, Nick Fury mentioned that he’d consulted on the design of the new helicarriers, making it likely that he was at least vaguely aware of the mass-scale surveillance program S.H.I.E.L.D. planned to use on the U.S. population.

Tony was already far more likely to support this kind of initiative than any of the other Avengers, partly because he’s a billionaire former weapons manufacturer, and partly because of his character development in Iron Man 3. That movie focused on him building a huge army of Iron Man suits as an attempt to deal with the trauma he experienced in The Avengers, at around the same time he would’ve been consulting on the new helicarrier designs. When Tony Stark is frightened, he builds machines and weapons to make himself feel safer. Project Insight (S.H.I.E.L.D.’s surveillance plan) was basically just this on a macro level, and it’s not much of a stretch to imagine him wanting superpowered people to register so he can know where the next danger might be coming from.

The other nod to Tony Stark in Winter Soldier was subtle, but significant. During one scene it was strongly implied that the death of Tony’s parents was directly caused by HYDRA, possibly even by the Winter Soldier himself. Yet another reason for Tony to want superpowered beings to be tracked and tagged: One of them may have assassinated his mom and dad.

This also brings us to the most essential point of a Civil War storyline, the conflict between Steve Rogers and Tony Stark. After all, Steve would definitely side with the Winter Soldier (A.K.A. his childhood friend Bucky Barnes) in this scenario, because he only assassinated people after being forcibly brainwashed by HYDRA. Bucky Barnes isn’t a villain, he’s a victim. And Steve would almost certainly argue that after decades of imprisonment and torture at the hands of HYDRA, Bucky deserves some privacy.

One of the key differences between the Tony/Steve relationship in the Marvel comics and movies is that in the Marvel Cinematic Universe, they basically don’t know each other. The Avengers saw them go from antagonistic bickering to grudging respect, but that’s nowhere near the devoted friendship that exists in the comics. This more distant relationship would make it a lot easier to set up a rivalry between the two characters, and their pre-existing ideological differences could do the rest.

At the moment, the handful of rumors about Avengers 3 point toward an appearance from the supervillain Thanos, but Marvel Studios are notoriously close-mouthed about anything remotely approaching a spoiler. Not only will we know little about Avengers 3 until well after Age of Ultron comes out in 2015, but several major characters will have been introduced to the Marvel Cinematic Universe before it’s time for Avengers 3 in 2017 or 2018. In other words, we can’t trust anything that’s presented as a straight-up fact about the film’s plot, even if it comes straight from the horse’s mouth. Remember how well they kept a lid on the true identity of Mandarin in Iron Man 3, right up until the last second? Or how Agent Coulson seemed to be genuinely dead, right up until he wasn’t?

All we can really do is speculate about the trajectory of the Marvel Cinematic Universe as a whole. And right now, its political climate makes “Civil War” seem far more plausible than it did before Captain America: The Winter Soldier came out.

Avengers 3 may be about Thanos, or the Kree/Skrull war, or some other storyline that we can’t yet predict. But if there’s one thing that argues in favor of “Civil War,” it’s the increasingly complex world-building of the entire Marvel Cinematic Universe. If Avengers 3 ends up being about the Avengers fighting against Thanos, the movie will already join an already oversaturated field of superhero vs. alien threat movies, including Man of Steel, Thor, Thor: The Dark World and The Avengers itself. “Civil War,” on the other hand, would allow the Marvel Cinematic Universe to stretch its legs and accommodate the kind of smart, layered comic book narrative that no other superhero franchise could even attempt.