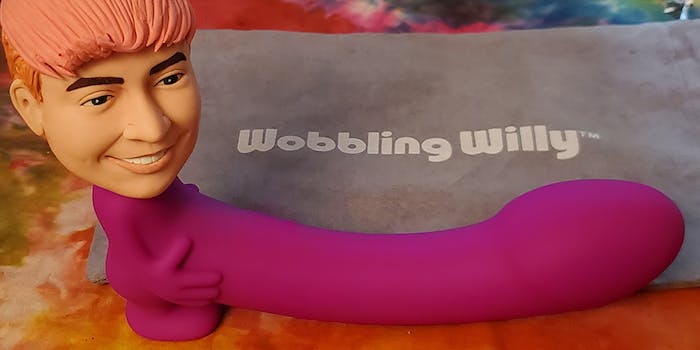 Orgasm Oddities is a column dedicated to exploring weird, niche, and inventive sex toys and accessories. We do not shame people who enjoy these toys. We simply seek to answer the question: Does this get a person off? If you have suggestions for sexy items we should review, contact Alex Dalbey on Twitter @thedialogtree or via email at [email protected].

Wobbling Willy provided a review copy of its product that included, to my surprise and joy, my own custom bobblehead.

The bobblehead is hand sculpted from clay based on pictures you provide (you can do just one, but the more the better). You get two Wobbling Willy proofs during the process. The first was of my head without hair, which made me laugh so hard I gave myself hiccups.

I gave my approval and sent additional pictures of my haircut. When the final proof came, I was amazed at the accuracy and smashed the “approved” button so fast I forgot to take a screenshot.

It was just a matter of days after approving the last proof that my personalized Wobbling Willy was shipped out all the way from the Swedish willy factory to my home in Minnesota. I unboxed it and found a soft grey storage bag. With apprehensive excitement, I pulled out the long, thick, fuschia shaft attached to a tiny body with a ribbed, bendy silicone neck. With its approximately four-inch tall body and eight-inch phallus, it looked like some kind of modern fertility statue. The silicone was soft but surprisingly rigid. I shook it gently and the head wobbled. I thrust it a few times and the head fell off. Not a good sign.

When it came time to test the Wobbling Willy on my body, it was quite a process. While the shaft is long, it doesn’t compare to how thick the head is. I have never been a size king/queen, but I have always been stubborn. With much patience and water-based lube, I was able to fully insert the toy and use it. At the right speed, the bobblehead had a slight wobble, providing an interesting counterweight sensation. However, that rocking motion slowly inched the head up the neck until it fell off. After an hour and a half of play, I was sweaty and sore, and I gave up on cumming with the Wobbling Willy.

Tries two and three were similarly unsuccessful. It was only when I removed the bobblehead so I didn’t have to repeatedly stop that I was finally able to get release. Even then, the orgasm was squeezed out like the last bit of toothpaste in a tube.

From a purely aesthetic perspective, the Wobbling Willy is wonderful. The attention to detail that goes into the custom heads is truly astonishing: $99 may seem like a lot to pay for a novelty sex toy, but the labor and quality of material that goes into the Wobbling Willy absolutely makes it worth that price. Still, many people can’t afford to drop that much money on a sex toy that will get them off, let alone one that mostly exists for laughs. But if you have the money to spend, this may be the best gag gift ever invented.