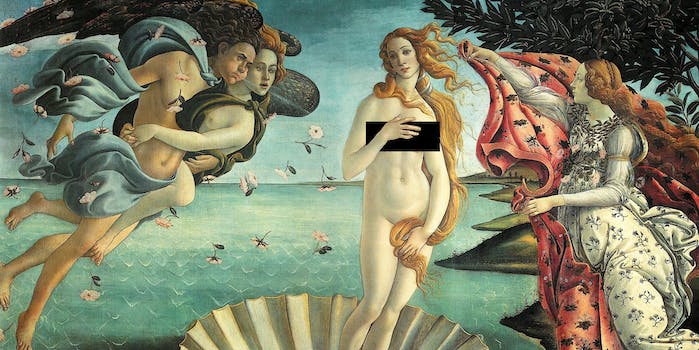 While David Karp was touting the platform's open freedom of speech policy, some users were learning about new tagging limitations that isolate their blog from the rest of the world.

When Yahoo! bought Tumblr, the two main concerns among Tumblr users were: 1) Will there be ads? and 2) Will Yahoo! try to make Tumblr more family-friendly?

Technically speaking, Tumblr’s new restrictions do not qualify as censorship. And, indeed, Tumblr CEO David Karp was on The Colbert Report Wednesday night, touting the company’s open policy: “We’ve taken a pretty hard line on freedom of speech, supporting our users’ creation, whatever that looks like, and that’s just not something we want to police,” he said.

MORE:
Tumblr doesn’t care how you feel about its censorship crusade


But meanwhile, Tumblr users were starting to realize the platform’s treatment of their content has changed, if subtly. Rather than removing it completely, Tumblr has made adult content unsearchable, although this will seem like a pointless distinction to the many people who use the site’s tag search system every day.

Probably because Tumblr knew how the news would be received (i.e., badly), most users are either unaware of the new restrictions, or are hearing about them via word of mouth. So for those of you who aren’t clear what’s going on, here’s the lowdown.

However, under Tumblr’s new content restrictions, posts from Adult-rated blogs will no longer show up on tags. Any tags. Also, Tumblr is able to flag your account as Adult without you labelling it as such—although users do have the option of appealing to the “Trust & Safety Team” if their feel their blog has been flagged unfairly.

In other words, if your blog has been flagged as Adult, nothing you post will ever appear on Tumblr’s public tag searches. Your posts will only be visible to your own followers and the followers of people who reblog your content. This means that if you want to publicize something like a Kickstarter campaign or political message, or even to signal boost a personal plea for help, that post will still not show up on Tumblr’s internal search engine. You are cut off from everyone except your own circle of followers.

Adult blogs are defined as having “substantial nudity or mature/adult-oriented content,” while NSFW blogs only have “occasional” mature content.

According to Tumblr’s explanation of the new restrictions, NSFW blogs should still show up on public tags, as long as users are not browsing in Safe Mode. However, realistically speaking, a huge number of Tumblr accounts are likely to fall into the category of Adult, and will become unsearchable. As Tumblr user robotlyra explains:

“If you’re a blogger who uses NSFW content for sex education purposes, you might as well just give up, or pray you have a wide enough reblog base, because even though your stuff is educational, it’s still going to be blocked from people who don’t already follow you.”

A large proportion of Tumblr’s many fandom users reblog adult-rated fanart and fanfic, meaning that they will almost certainly be blocked from tag searches, effectively crippling the way the fan community interacts on Tumblr. Not to mention the thousands of everyday users who reblog the occasional semi-nude pic among their Pinterest-style photos of horizons and cupcakes, or the huge number of adults who post “adult-oriented” content of any kind, because they’re, you know… adults.

Many Tumblr users are finding that some tags have disappeared entirely from Tumblr’s iPhone app.

It’s unclear whether this is directly linked to the new content restrictions, but for example, iPhone users searching the #gay, #lesbian or #bisexual tags have reported seeing the result “No posts found,” although #bi, #lgbt and #queer still produce results.

Needless to say, the #gay tag is hardly likely to be any more “Adult” than the tags for #girls and #anime, which used to be full of NSFW content. 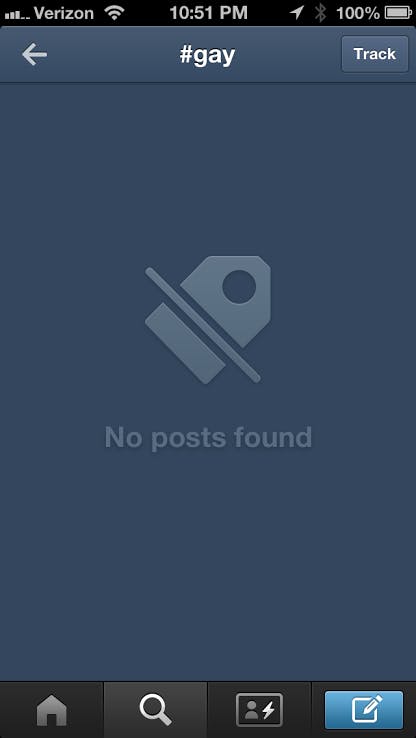 Many Tumblr users are already lashing out against these new restrictions, both with angry rants and logical explanations of how it would be a lot better to let people to choose whether they want to view NSFW content themselves. Adult content creators are particularly upset—for example Tumblr artist slugbox, whose art no longer shows up on tags. As slugbox explained on a post that has already garnered over 12,000 notes:

“They have not technically censored us. Rather, they have made it essentially impossible for us to find and engage with new connections and people, by completely cutting us off from all forms of discovery.

“This means the only way to gain new followers is through offsite linking. Because if a blog likes, replies, or reblogs an adult blog, they are likely to ALSO be an adult blog, and thus unsearchable. SOoooo basically there’s almost NO point to being on the site.”

We don’t yet know how strict Tumblr will be about flagging NSFW and Adult blogs—Tumblr didn’t reply to a request for comment Wednesday—but it’s likely that the new restrictions will stir up a fair amount of paranoia among the Tumblr community. After all, the sudden disappearance of thousands of blogs from tag searches could put a serious dent in Tumblr activity.

This has the potential to gut many of the niche communities that make Tumblr so popular among young people and online subcultures—in other words, the people Yahoo! were attempting to appeal to in the first place.

Tumblr’s longstanding policy regarding NSFW content has not changed and emphasizes the importance of free expression. As addressed in these policies, we are constantly taking measures to ensure our users can avoid this content unless they’d like to see it. You can read about some of these features here: http://www.tumblr.com/docs/en/nsfw

Adult and NSFW content will be visible to anyone who has opted-in via their Settings page.

Different app environments have different requirements that we do our best to adhere to. Users can also find all content with Tumblr search in their mobile web browser.