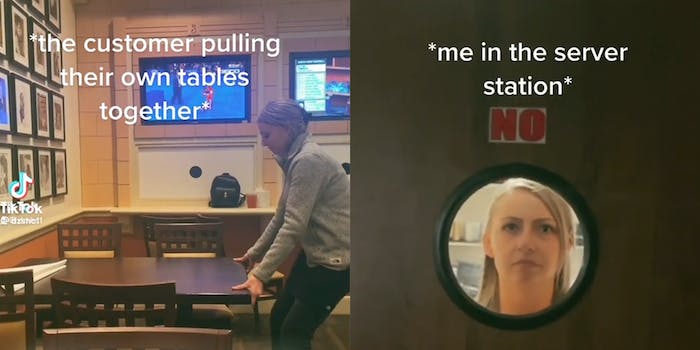 ‘It’s like going into someone else’s house and rearranging their furniture’: Server complains about customers who push tables together (updated)

'The worst when they pull 2 tables from 2 diff sections.'

A server has gone viral on TikTok after putting customers who push tables together on blast.

In the video, user Dez (@dzshc1) shows herself as a “customer” pushing tables together and rearranging chairs. The camera then cuts to Dez “in the server station” giving the “customer” a look of death.

The video reached over 127,000 views, with many users in comments chiming in to explain why customers shouldn’t push tables together without asking wait staff for help.

For some, their main concerns are safety-related.

“Fun fact. We have to organize them in ways that don’t block exits for emergencies,” one user claimed. “So no you can’t just do this.”

“Me waiting until they finish to come out and say ‘sorry that’s actually a fire hazard to put those tables there, the hostess can help you get seated,’” another added.

Others expressed concern about how doing this messes up the wait staff’s distribution of work. As many wait staff are assigned by section, pushing one table into another section may result in them receiving less in tips.

“The worst when they pull 2 tables from 2 diff sections, and then 1 server is left without a table which means they don’t make as much money,” a commenter explained.

“It’s bad because servers are split up in different sections, so you could be taking a servers pay or a reservation,” a second said.

More still were simply annoyed by the customers’ apparent inability to properly join tables together or see if there are any larger tables already available.

“I had a table pull their own tables together and proceed to knock off all the plates cups and silverware that were on the table already,” a commenter recalled.

“We have several big tables at my job and almost DAILY i’ll have people move our smaller tables together when our big tables are RIGHT there and OPEN,” another stated.

While some servers acknowledged that customers were most likely just trying to be helpful or not bother wait staff unnecessarily, there was a general agreement that, if a customer wants to join tables, they should simply talk to a server about it.

“For those asking if this is bad…it’s like going into someone else’s house and rearranging their furniture. Just ask for help,” one said.

Updated 10:35am CT, May 26: When reached for comment, Dez told the Daily Dot that “One of the reasons it’s bad is because often customers will take a table from a different server’s section which can mess things up.“

“Another reason is if the host has a waitlist, they might have already had that table set aside for another party,” she continued. “People also sometimes rearrange tables in a way that block the server’s path and/or fire exit[s].”