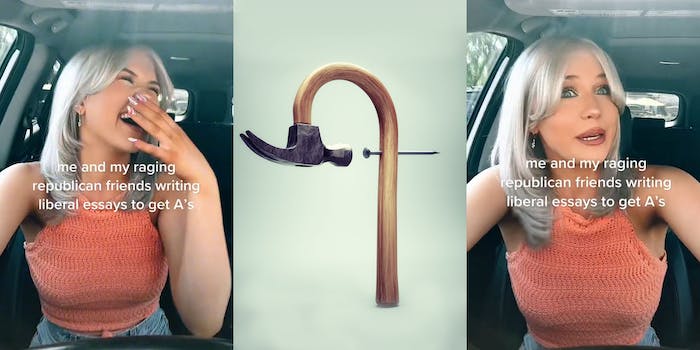 ‘This is the best self own I’ve ever seen’: A young Republican claimed to write ‘liberal essays’ for a good grade. TikTok told her she was just using facts

'So you admit that Republican philosophy is not based in logic, critical thinking, and historical record?'

TikTokers are saying a Republican college student committed a “self own” after claiming she wrote “liberal essays” for higher grades in college.

@riannasun2 is a TikToker and social media personality known for making posts related to Republican politics. On May 5, she made a TikTok post concerning university grading, echoing the popular Republican talking point that conservatives are being marked down in their colleges simply for being conservative. In the video, she claims that she wrote ‘liberal essays’ in college to receive better grades. In comments, TikTokers clowned her saying instead that she was receiving high marks for writing a coherent, fact-based essay.

@riannasun2 Anyone else ? #republican #ca #cali #conservative #usa #america #politics #joebiden #sleepyjoe #makeup #republicangirls ♬ We did what we had to do gurl aaahahaha – Boman Martinez-Reid

Commenters seemed to find the video funny, with some arguing that she revealed more about her ideology than she realized with this video.

“This is the best self own I have ever seen,” wrote one user.

“Ummm… you didn’t do what you meant to do here,” stated another.

“So you admit that Republican philosophy is not based in logic, critical thinking, and historical record?” asked a third.

Others in comments questioned her premise, with many noting that the idea of a “liberal essay” is flawed.

“I’ve gotten A’s on papers that argue directly against the prof/course material [because] I used clear logic and sound sources,” claimed a user. “It’s not abt the opinion.”

Many others stated that the trick to a good grade in university isn’t ideological correctness—it’s simply following the professor’s instructions.

“Why would you even bother? This feels like more effort than it’s worth,” explained a commenter. “Just do the assignment according to the rubric.”

While many comments were against @riannasun2, some defended her with their own claims.

“Been there done that,” shared a commenter. “They don’t even have [to] make sense.”

“I did this once and my professor handed it back and said I know this isn’t what you believe and I had to rewrite my paper,” recalled another.