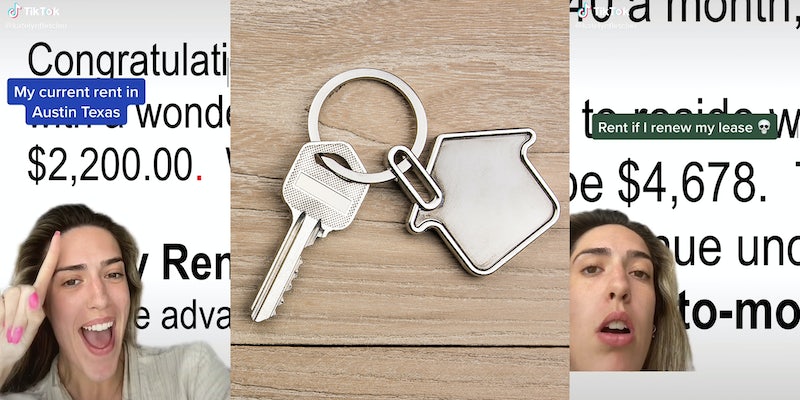 ‘The audacity to write ‘congratulations’ in the email’: Woman says her rent went up by $2,500 in Austin, apartment sent her email congratulating her

A video showing a nearly $2,500 increase in rent prices went viral this week after it was posted by user Katelyn (@katelynfletcher).

In the TikTok video, Katelyn shows an email that starts with the word “Congratulations” and lists what she claims is her current rent price, $2,200. The video then cuts to reveal what Katelyn says would be her new rental cost if she chose to renew—$4,678, a staggering increase of almost $2,500. Katelyn notes she is based in Austin, Texas.

In the comments section, TikTokers were shocked.

“The audacity to write ‘congratulations’ in the email,” one said.

For all the doubters, Katelyn claimed in comments that “It’s real I can confirm.”

Many questioned the legality of such a move.

“That seems illegal,” a user wrote.

“This is insane and I would like to know how it’s not illegal,” another TikToker said.

It does seem that this move is within the limits of Texas law. The United States reportedly does not have a nationwide rent control or stabilization system, relying on individual states to develop their own systems for keeping rent prices in check.

Texas has no such laws or ordinances with regards to rental price increases, according to the Austin Tenants Council. As such, landlords are free to increase rental prices as much as they please without legal consequences.

This is an especially big problem in cities like Austin, where a growing tech industry and other factors have led to rapid population growth—and subsequent increased demand on the housing market.

Additionally, according to Texas-based firm McCaw Property Management, “there is no law requiring Texas landlords to give their tenants a notice of rent increase.” However, it also notes that a lease must expire before the rental price can be changed.

As many users noted in comments, this seems to be a trend in Austin at the moment. Katelyn is not the first Austin resident to go viral after blasting their rent increase on TikTok.

Spectrum News reports that between January 2021 and January 2022, rental prices in Austin went up by 35%, the steepest increase seen in any city nationwide.