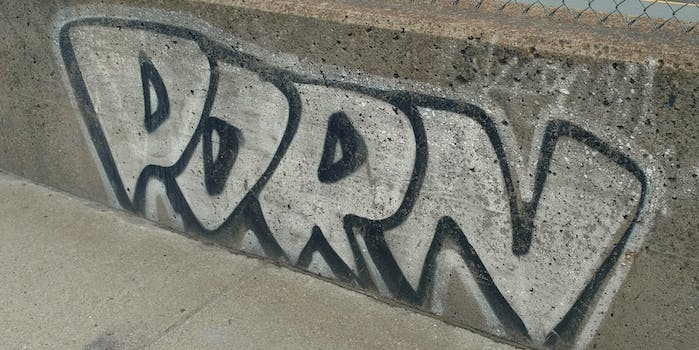 Behind the scenes of porn’s virtual reality experiment

The industry is testing out technology, making lots of mistakes, and hoping to innovate along the way.

Chanel Preston, clad in a too-small sheer top, bright red miniskirt, and black thigh-high boots, addresses a pair of wide-lens GoPros sitting at knee-height. “You’re just gonna stay there and watch,” she tells the camera rig, which looks like a sad little robot groveling at her feet. Its two bulging eyes protrude from the long camera arm that stretches back to the all-female crew, which is intently watching her every move.

The room is decorated with an ornate wooden throne, a chandelier that glints off three big film lights, and ceiling-to-floor red curtains with gold fringe. Save for the modern bondage gear, it looks straight out of an Edwardian court, which makes the futuristic nature of this shoot seem all the more out of place. The resulting video will be an immersive 3D, 360-degree video watchable with a VR headset.

The camera rig on this shoot is outfitted with two modified GoPros, each with a 220-degree field of vision. Contreras made the rig out of spare parts from Kink’s camera room. Two monitors reflect what each camera is seeing, which is what each of the viewer’s eyes will see when they watch the film with a VR headset; this is how an illusion of depth is created. Later, Contreras will film the back of the room, where there’s no action happening, and digitally stitch all of the footage together to create a 360-degree video. That means a viewer wearing a headset can watch the main event, but also glance around and behind to have a sense of being in the room.

This complicated stitching process introduces some problems. Anything—body parts or sex toys—that move out of the frame will seem to disappear once the footage is stitched together. That dead space is to be avoided at all costs. There’s nothing sexy about a vanishing leather flogger. You don’t want a performer’s whip-wielding arm to suddenly dematerialize. This is further complicated in the case of this Kink shoot by the fact that the stationary cameras are just a couple feet from the performers and from the ground.

It all makes for a significant challenge, even for Chanel, an award-winning performer who has been in the industry for six years. At first, she’s too sensitive to the borders of the shot—she is slightly bent over, as though there’s a ceiling just above her head, and her movements and positioning is constrained as she locks her sub into a chastity cage. “Let’s do it one more time, you’re kind of hiding,” says Contreras.

Eventually, they switch places so that Chanel can see the monitors and get a better sense for just how much room she has to move around within the shot. A crewmember jokes, “Years of training out the window!” Contreras offers sympathetically, “It’s a new medium.”

In the next take, Chanel undoes her sub’s ball gag and tosses it to the floor. Contreras cuts. “If you can try not to throw it so far,” she says. “It was, like, half out of frame.”

“I guess I better get used to this,” says Chanel. “This is the future.”

For now, he says, “We’ve pulled off to the shoulder and are waiting for more interesting things to happen”—and for the technology to dramatically improve. He suspects that might take five or 10 years.

Brian Shuster, the founder of HoloGirls, believes it’s where the industry is going. “There’s absolutely no question that VR is just going to dominate media,” he says. “There will be a time where people will be astonished that you were ever asking the question.”

Kelly Holland, CEO of Penthouse, has just started investing in VR and hopes to launch special membership plans that come with free VR headsets. She recently took a sample of a Penthouse VR shoot—a pool scene with, as she puts it, “suntan lotion, bubbles, volleyball”—to a mainstream television tradeshow in Cannes, and says it was a hit. The businesspeople she showed it to spun around so much, taking in the scene, that she had to hold them by the shoulders to keep them from toppling over. “They were all engaged at a visceral level, which is always what I look for,” she says.

There is an upside to these problems, though, according to Shuster. He says the adult industry, because of its unique needs, has been forced to innovate in ways that, for example, the gaming industry has not. In mainstream VR, he says, the general rule of thumb is to shoot at least six feet away from the object or action that you’re filming. That’s because of something called the parallax, which is the overlapping of images captured by two cameras with slightly different perspectives. This can happen, like in Contreras’ case, where only a pair of cameras is filming, or when there are many more cameras capturing 360 degrees at the same time. This can create a blind spot or distortion once the disparate images are stitched together. The farther away the camera is from the action, the less noticeable the parallax.

This is her third VR shoot and the past two have been equally challenging.  “I had to get really close to the camera and that’s a little odd,” she says. “When it’s just regular sex, the guy has to be really still. You can’t be moving around, it has to be very choreographed.” That’s unlike with non-VR shoots where there’s more room for improv. “Usually, we can just go for it,” she says.

As much as she called VR “the future,” she isn’t anticipating an industry-wide takeover. “I don’t think everyone’s going to start shooting this way, but I think there will be more people shooting this way,” she says. “I’m going to equate it to books-versus-iPad. There will always be people who like watching it in 2D and they’re just more comfortable with that.”