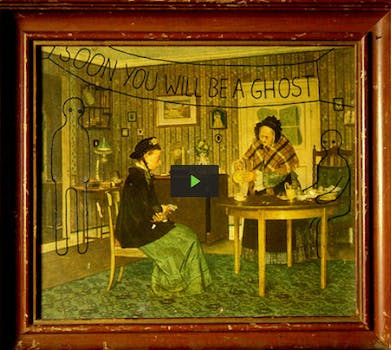 The author of popular webcomic Pictures for Sad Children said he acted depressed because he thought that's just what creative types did.

The creator of popular webcomic Pictures for Sad Children has posted a Kickstarter update in which he claims to have faked depression, drawing mixed reactions from his backers.

On Wednesday, John Campbell, whose webcomic employs dark humor, updated the Sad Pictures for Children Kickstarter page— a successful campaign that funded a second collection of his webcomic work—with a lengthy post entitled “I’ve been pretending to be depressed for profit and I’m sorry.”

Campbell details how as a child he feigned sadness to imitate artists and authors who appeared to be afflicted by the melancholic condition. As he grew older, he realized that he wasn’t actually despondent, but that he was only behaving that way because he thought that’s what creative types do.

His solution? To stop the charade and declare that he is not unhappy.

“I’ve done a lot of soul-searching and now believe it is my calling to be the first ‘artist’ to admit to an audience ‘I’ve been pretending to be depressed.’”

Campbell also confessed that his biggest regret wasn’t that he capitalized on his feigned depression, but that he made it easier for what he calls “borderline people” to trick themselves into thinking that they too had the blues.

“Any work participating in the ‘culture of depression’ has probably contributed to these sad unnecessary cases.”

Campbell concluded his admission with a mea culpa and a plea for forgiveness.

He also provided an actual progress report on Sad Pictures for Children, indicating that the book should be finished and delivered by the end of the year. Supporters of the project were originally scheduled to receive their rewards in July 2012.

The post has earned some attention, getting more than 500 likes on Facebook within hours of its publication. It has also saw mixed reactions from those that contributed to the campaign.

Some, like backer Peter Odom, felt that Campbell was trivializing the desolation felt by those afflicted with depression.

“Whenever you do get around to sending books out, please don’t bother sending any to the address I provided,” Odom replied.

“I don’t need another reminder in my life of the existence of people like you, who hand-wave away the suffering of others as a false consciousness they are too self-indulgent to break away from.”

Others took his word at face value and even referenced a Sept. 11 comic where a character says “But I faked being depressed for so long” in a hidden panel as proof that the artist was being sincere.

The majority of the commenters reacted as if the update was a 681-word joke. One particular individual, cited the absurd language of the following passage as the reveal of the gag:

“I got more and more exhausted with acting unhappy and withdrew from the majority of my friends. I spent a great deal of time alone and extremely happy, making art suggesting otherwise in order to attract others who were also pretending to be what I was faking.”

The Daily Dot reached out to Campbell seeking clarification on the intent of his post, but the artist has not responded as of this writing.