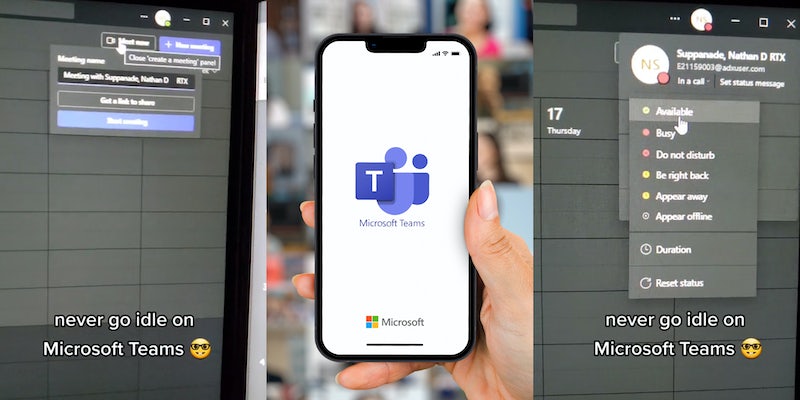 ‘Not suspicious at all’: Worker shares hack to never going idle on Microsoft Teams

‘Or work for a company that respects the output you do regardless of traditional work hours.’

With many people still working from home, offices around the U.S. have opted to subtly monitor their workers through Microsoft Teams. If an employee is not present on Teams for long enough, their status will change to “idle”—outing them as someone who’s not currently at their computer.

Numerous users across the internet have proposed workarounds to appear “active” on Teams even when they aren’t at their computers. Mouse jigglers and fake PowerPoint presentations offer workers a chance to step away from the computer without alerting their workplace.

Now, another user has gone viral and sparked a discussion with their solution: a fake meeting.

In a video with over 707,000 views, TikToker Nate (@astr0nate) shows his method for not going idle on Teams.

In summary, Nate says to start a meeting with only yourself. From there, change your status from “in a call” to “available.”

In the comment section, Nate advises using the tip sparingly.

“Don’t do it all day long… c’mon guys,” he writes. “Many things in life that are appropriate with moderation can be abused.”

At first, some commenters were thankful for the advice.

“This has worked amazingly for me,” said one user.

“The number of people who have to do this because of management is amazing,” added another.

Other users soon jumped in with their own tips.

“Put a mouse on top of an analog watch, it will keep ya mouse moving without downloading anything,” another person said.

The conversation quickly turned into a discussion about monitoring employees altogether.

“Or work for a company that respects the output you do regardless of traditional work hours,” one user wrote.

“If the company measures productivity using teams availability, you need to leave that company asap,” another TikToker suggested.

“Teams needs to just take this feature off,” one person said. “Its so 1980s to monitor people.”

The Daily Dot reached out to Nate via Instagram direct message.