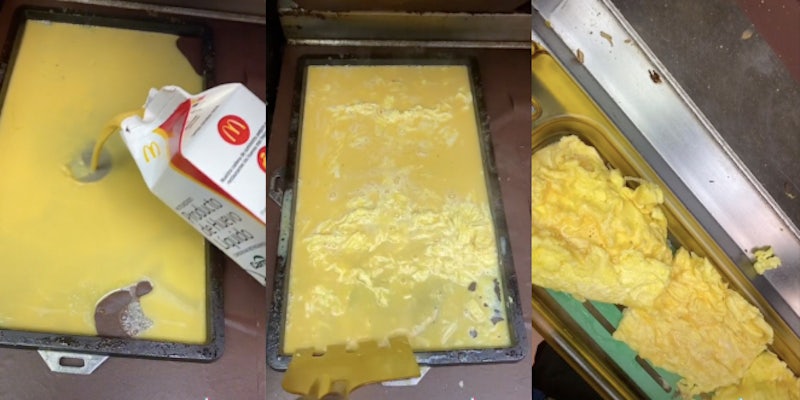 'And this is why I don’t eat egg from restaurants and fast food places.'

The eggs were the center focus of this video as user Yanii (@kallme.yaniii) demonstrates how to make scrambled eggs. Yanii often posts McDonald’s recipe content on her account. This video is no different. In the clip, Yanii reveals a grill with a metallic rectangular frame and what seems to be Teflon Sheet layering the grill.

“This is how we make scrambled eggs at McDonald’s,” Yanii says in the video.

She starts off by applying butter to the grill followed by pouring a small carton of liquid eggs on it. Yanii picks up a spatula and starts scrambling the eggs. She keeps scrambling until a giant piece of the egg is formed. She then divides the egg into fours, completing the recipe.

The video has amassed over 919,000 views since being posted on Sept. 14, with most of the viewers pleasantly surprised with how the eggs are made.

“Better than expected, I assumed they were frozen,” one viewer commented.

“Honestly? That’s better than I assumed. I’m good with that,” a second agreed.

“At least you’re are fresh when I worked at McDonald’s ours was frozen,” a third concurred.

Other viewers were less than enthusiastic, pointing out the discrepancies in making the eggs.

“No gloves?” another person asked.

“Why dont u flip them to cook evenly on the other side too?” a third questioned.

“Thats why its so weird and tasteless,” a fourth pointed out.

Yanii isn’t the first McDonald’s worker to go viral after revealing how McDonald’s cooks their eggs. In June, The New York Post reported that content creator Tizzy Tay went viral for the same reason. The only difference is, that most of the people were disgusted with Tay’s video instead of impressed.

According to McDonald’s website, they assure they use real eggs. Their website claims their scrambled eggs are, “made with liquid eggs that are cooked fresh on our grill with real butter.”

The Daily Dot reached out to Yanii for comment via TikTok comment and to McDonald’s via email.