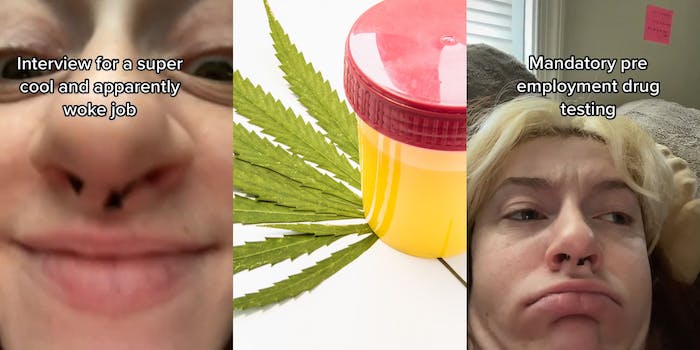 ‘They have no right to know what I do at home’: A TikToker went to a job interview but lost interest when they mentioned mandatory drug testing. Commenters say they’re right

'I failed mine and they still hired me.'

A user on TikTok recently went viral after sharing a story about getting an interview for a “super cool and apparently woke job,” only to become disinterested after the TikToker learned the job had “mandatory pre employment drug testing.” Commenters say that the TikToker is right to do so.

The video, posted by user @goodnight.punpun, has sparked considerable discussion and accrued over 185,000 views since being posted on May 12.

States that have legalized marijuana have seen massive increases in tax revenue. For example, in 2019, the state of Colorado brought in over $300 million in taxes from marijuana alone. Additionally, the state saved millions from the reduction in incarceration rates owing to marijuana legalization.

Marijuana legalization also has broad bipartisan support, with around two-thirds of American adults supporting the initiative according to a 2021 poll by Rasmussen Reports.

Despite this, issues linger with marijuana’s broader acceptance in the public and the continuing racial divide between incarceration and testing rates. Even in some states where marijuana is legal for both medicinal and recreational use, employers can test, and discriminate against, job applicants who test positive for marijuana.

Drug testing policies disproportionately impact Black people as well, with a 2013 survey noting that “63% of black workers were employed in a workplace that performs drug testing, whereas only 46% of white workers were.”

Given this information, it’s easy to understand why some TikTokers sided with @goodnight.punpun’s reaction to the employer’s decision to test applicants.

“I can understand if it’s a job that uses heavy machinery but the rest is bs,” wrote one user.

“I will literally not accept a job [because] they have no right to know what I do at home,” stated a second.

“Dude if I’m gonna sit in an office at my desk for eight hours a day I’m gonna have a Little fun whether you like it or not,” added a third.

Some users offered tips for passing drug tests, while others shared tales of their own drug testing experiences.

“I failed mine and then a day later another job called and was like ‘so the person you interviewed for that job called me and we dont test here,’” recalled a user.

“I failed mine and they still hired me,” claimed another. “This is a win in my book.”

Finally, a few users warned @goodnight.punpun to stay away from workplaces that appear outwardly “woke.”

“Be wary of any ‘super woke’ work place,” wrote a commenter. “It’s all a charade, just like the businesses with ping pong tables, beer fridges, etc.” Another user elaborated: “They do all that but pay you $30k.”