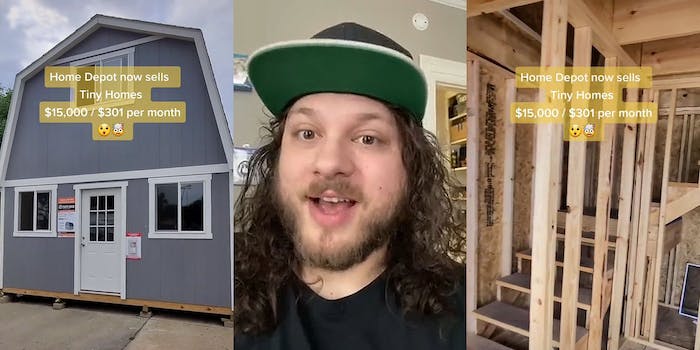 In May, a product from Home Depot went viral: a small home that cost only $252 monthly, or just under $13,000 when bought in full.

Soon, people from all over the internet were posting their stories about investing in the product, which is made by Tuff Shed. One user, TikToker Langford (@langfordtreecare), posted videos of his own take on the Home Depot product, showing his fully outfitted new tiny home that he says is being used as a photo studio, among other things.

However, as videos and posts about these homes have gone viral, so too has the backlash against them. Now, TikToker and musician @indubwetrust is sounding the alarm on the product, advising users on TikTok not to invest in what they may initially think is a bargain.

@indubwetrust #duet with @i.am.georgee IF I SEE ANOTHER WALK THROUGH HYPE VIDEOS FOR THESE FLIMSY SHEDS I SWEAR #tinyhouse #tinyhouselife #diy #diyproject #tinyhousetour ♬ The Home Depot Beat – The Home Depot

“I’m going to say this one more time: Do not use the Tuff Shed from Home Depot,” his video starts. “Go on YouTube. Anyone who’s ever tried to do this tells you not to do it.”

Why? @indubwetrust elaborates, “Not only do you have to insulate, furnish, pay for utilities, basically have to pay for an entire house anyway—the horror stories of the people installing it do not stop.”

The problems with living in a shed from Home Depot are numerous. To start, Tuff Shed itself advises against using its products as homes.

“As sold, Tuff Shed buildings are not designed for nor intended to be used as a permanent, full-time dwelling,” a Tuff Shed website states. “Local building codes or other laws may also prohibit use of sheds as dwelling places.”

The product mentioned in the viral video is also no longer for sale, though numerous other tiny homes are available on Home Depot’s website, admittedly not made by Tuff Shed.

Furthermore, there are numerous up-front costs for buying a Tuff Shed and converting it into a home.

Langford notes in his original series that his costs reached $50,000 in total. The costs in this area come from insulation, decoration, meeting zoning requirements, electrical wiring, plumbing, and more.

Others on the internet complain about the process and Tuff Shed itself. They note inadequate installation, legal issues with building them, and other costs adding up rapidly, among further issues.

As a user on Reddit noted, the buildings are designed to be sheds, not permanent dwellings.

“Tuff Sheds are sheds. Not living spaces,” user tonydiethelm said. “A proper wall has sheathing installed, then a moisture barrier, then siding. If you get fancy, you get a rain wall, which is a good idea. TSs just have T111 siding slapped on the framing. Water is going to get in. It looks like the cabin shells have properly done walls, but the sheds are just …. sheds. There’s more. Far more. These things are SHEDS.”

On TikTok, users detailed their own experiences with Home Depot and their thoughts on Tuff Shed living.

“I worked for Home Depot 9 years, they subcontract,” a commenter claimed. “Their installers do not care and they will not come to fix a mistake and never buy their warranty!”

“I used to work at home depot, I can 100% vouch for this,” another alleged. “I worked in cust. service and the streams of complaints didn’t end.”

This is a common problem for viral “cheap living” videos, many users noted.

We’ve reached out to @indubwetrust via Instagram and Home Depot via email.