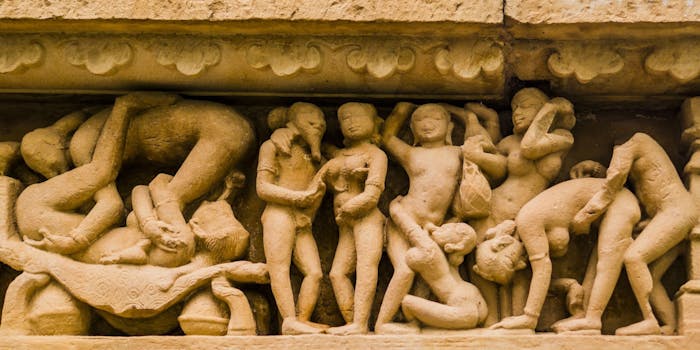 Since there have been rocks and tools, people have been making pornography.

The earliest of cave drawings depicted naked imagery. The Venus of Willendorf, a rock carving showing a woman with exaggerated breasts found on the banks of the Danube River, dates back over 25,000 years. The ancient Greeks and Romans left a legacy of art and writing about heterosexual, homosexual, and group sex. The Moche of Peru depicted sexual acts on their pottery. And we all know about the Indians instructing couples on a myriad of sex positions with the Kama Sutra.

Even when art became Art, artists created work about sex acts for wealthy aristocrats. One of the most famous is I Modi, a book that showed 16 different sex positions in engravings, the original of which was believed to be destroyed by the Catholic Church during the Renaissance. Catherine the Great, the infamous 18th-century ruler of Russia, is rumored to have devoted a room in one of her palaces entirely to erotic art—eyewitnesses reported seeing tables with legs carved to look like penises and furniture that resembled vulvas. Even into the 19th-century, Impressionists like Edouard Manet and Edgar Degas shocked society with their nude paintings.

However, the concept of pornography as we conceive of it today was not invented until the Victorian Era. And with access came the passing of laws prohibiting the sale, publication of, and trafficking in images and depictions considered pornography. The English Obscene Publications Act of 1857 was the first of these laws and gave police the authority to seize and destroy offending material. Almost 20 years later, the American Comstock Act made it illegal to send obscene or rude items through the mail in the U.S. However, while both laws used the word “obscene,” neither defined the term.

That is until the English courts established the Hicklin test for obscenity. The test arose out of a court case in 1868, Regina v. Hicklin, over anti-Catholic pamphlets, which were not exactly pornography. However, the decision outlined that obscene material was defined as the “tendency … to deprave and corrupt those whose minds are open to such immoral influences, and into whose hands a publication of this sort may fall.” By 1896, America had also adopted the Hicklin test as a measuring stick for obscenity.

Yet, even under the stringent Victorian Era laws, pornography flourished. The invention of the moving picture brought a new wave of pornography. Two early pioneers in the genre of pornographic film were Eugène Pirou and Albert Kirchner, who directed the proto-striptease Le coucher de la mariée in 1896, featuring a newlywed slowly undressing in front of her husband. Soon pornographic films were being produced in the United States and France—though due to obscenity laws, their distribution was private.

As society started to relax a little about sex (thanks to the hippie movement), the government followed suit. In 1973, the United States Supreme Court voted to narrow the definition of obscenity to meet a three-prong test, including whether it “lacks serious literary, artistic, political, or scientific value.” The decision in Miller v. California led to fewer prosecutions for pornography convictions.