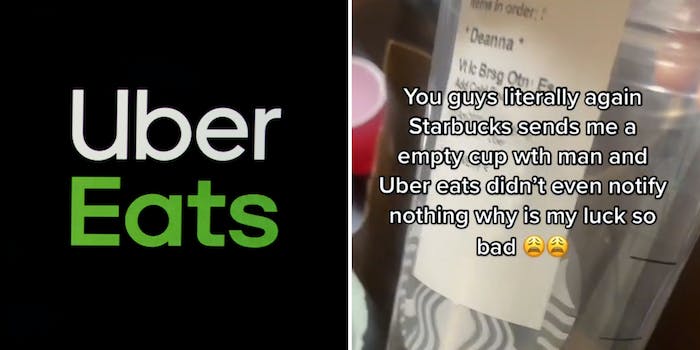 'What the heck, Starbucks?'

A TikToker went viral after claiming that instead of her requested Starbucks beverage, her Uber Eats order arrived with just an empty cup.

The video, posted by user Sabrine (@sjawad944), shows her opening an Uber Eats order only to discover an empty cup alongside her two other drinks.

“You guys—again?” she asks. “What the heck, Starbucks?”

The TikToker says “again” because this isn’t the first time Sabrine has had an Uber Eats order from Starbucks arrive incomplete.

in March, she posted a video to TikTok showing a Starbucks delivery missing a drink accompanied by a note saying the location was out of her requested oat milk.

“They didn’t even notify me,” she wrote in the comments under this video. “I would [have] switched it with something else.”

“Like at least add a cake pop or something in the bag,” she added in the text overlaying the video.

In March, another TikToker went viral after saying that, instead of a drink, Uber Eats simply delivered her a bag with a note that said they were out of her order.

While Sabrine says she received a refund for her first order, users still expressed frustration about this process.

“Uber eats always missing some of our items,” one user claimed. “They never give us our full order from anywhere.”

“​​They ALLLLLWAYS do this to me on ubereats,” another agreed. “Always forgetting food!!!!!”

Some users claimed that Starbucks used to process refunds directly but now relies on Uber Eats to perform this function.

“They recently changed it, we can’t give recovery cards no more, or call to substitute, just a note to process a refund through uber eats,” a commenter claimed.

“UberEats is not responsible for your food not being available. It’s the restaurant’s fault. They prepare your order AND *SEAL* your bag,” another stated.