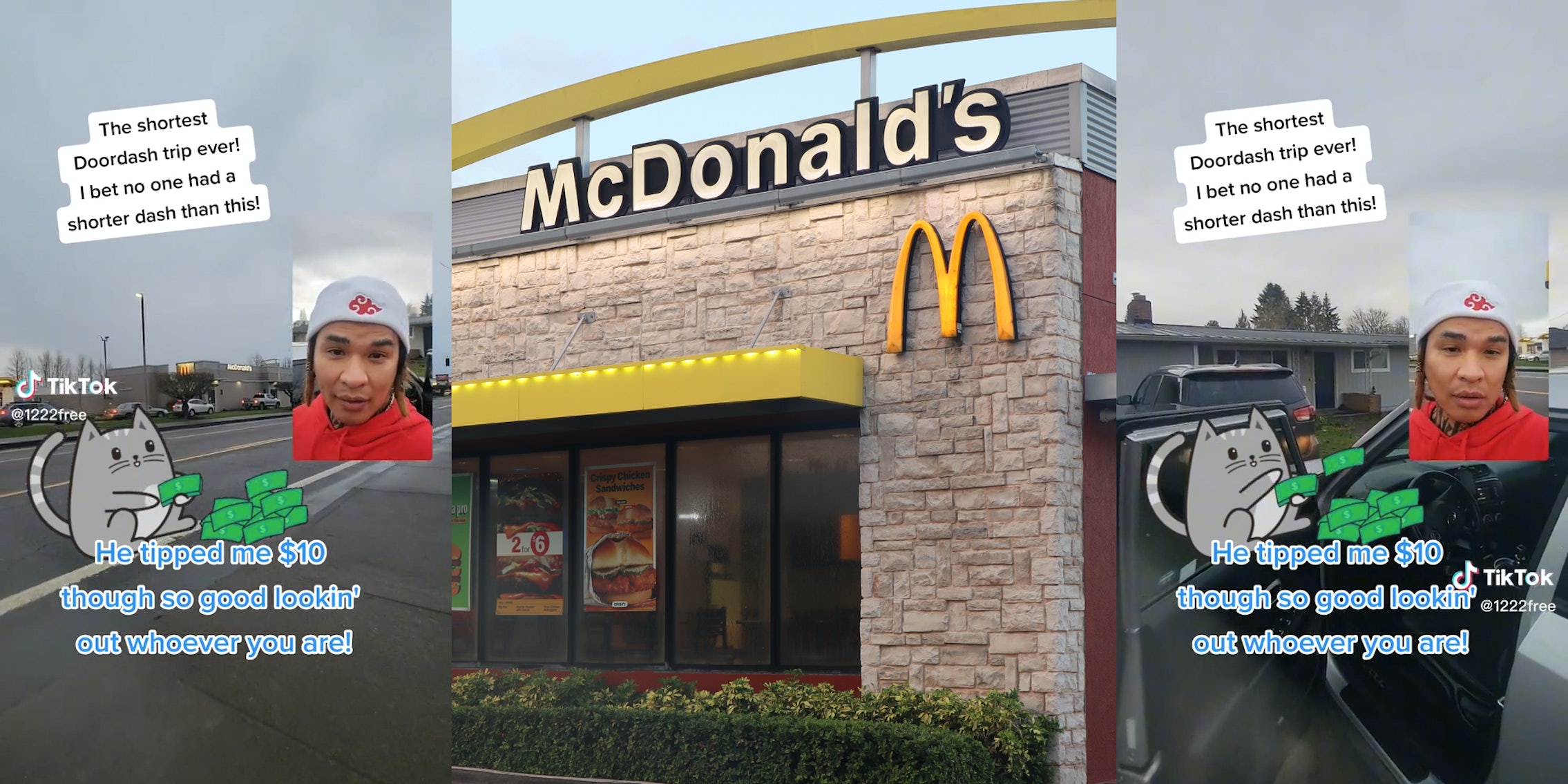 ‘He could have walked across the street and got his own meal’: DoorDash driver films ‘shortest delivery ever’ after customer orders from McDonald’s across street

A DoorDash driver expressed shock after a customer placed an order from the McDonald’s location across the street from their house.

TikTok user @1222free, who says he’s a driver for DoorDash, posted a video of the delivery.

“Look at this DoorDash order I got. I got an order from McDonald’s,” he said, showing a McDonald’s location. “And the dude just lives right across the street, right here.” He shifted the camera to show the customer’s house with multiple cars parked in the driveway, where his own car also is.

He questioned why the customer didn’t walk across the street to pick up his own meal and called it the “shortest DoorDash trip ever.” However, he noted the customer tipped well for the order. “He tipped me $10 though so good lookin’ out whoever you are!” he captioned the video.

The video garnered over 52,000 views as of Jan. 24, with viewers proposing reasons why the customer couldn’t walk across the street to pick up his own food.

“Maybe they’re disabled, or can’t leave the home due to sleeping kids. Or maybe just because they don’t want to walk,” one suggested.

“Maybe he works from home and can’t leave that long I used to order my wife food when she worked at home,” another said.

“He looked at that line and was like I’m good. Haha,” a third joked.

Other suggestions range from the customer placing an order on behalf of their kids while away from the home or that they work from home and can’t leave work unattended for too long. As @1222free noted in a comment when responding to a viewer, “Maybe we’ll never know.” One of the main benefits of using a service like DoorDash is convenience, and many customers, like @1222free’s, seem to not mind paying a premium for it.

Danny Le told the Daily Dot he’s based out of Independence, Oregon, and has received a lot of negativity from viewers since the video went viral.

“I guess maybe because it struck a nerve with people because they probably felt the person was sick, had COVID, was disabled etc,” he said.

Looking back, he said he believes what he said was “inconsiderate” and that he “shouldn’t have said it.” Since the content creator, who has nearly 8,000 followers, spent most of his life incarcerated, all of this is new to him.

“So I’ve spent more of my life locked up than free … and I’m constantly tripping out over things that other people might look at as normal such as ordering Doordash from a McDonalds that’s right across the street,” he shared.