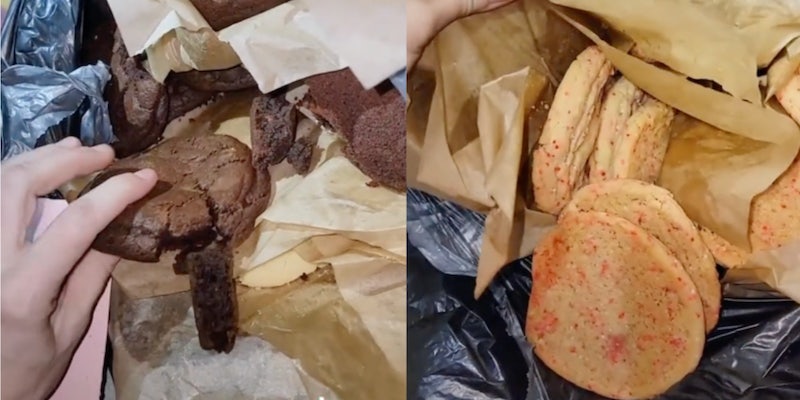 A TikToker allegedly discovered a trove of “at least 200” cookies in the dumpster behind a Crumbl Cookies location. The video shows Tiffany She’ree (@dumpsterdivingmama) sorting through a dumpster to reveal tray after tray of uneaten cookies.

“Look at all of the cookies,” she says. “Straight off the tray… They’re warm!”

At first, some users were taken aback by the idea that She’ree would remove cookies from a dumpster.

“You have no idea why they threw them away,” one user said.

“I’d be careful. I have worked at a bakery before and we were told to tamper with the food before tossing it,” another TikToker claimed.

On the flip side, many who believe the Crumbl Cookies location threw out perfectly good cookies began tagging the founder of Crumbl Cookies, who is a prolific TikTok user.

“@sawyerhemsley it would not kill y’all to partner with local food banks, probably a tax write off too,” a commenter wrote.

Other users concurred. “Why not just donate these??” asked a TikToker, again tagging the company’s founder and the company account.

Some users claim that restaurants donating uneaten food is not unheard of.

“At least Panera donates their leftovers daily,” a user alleged.

According to Panera Bread’s website, this is true. The chain has a campaign called Day-End Dough-Nation®, where “At the end of each day… bakerycafes package unsold bread and baked goods to donate to local hunger relief and charitable organization[s].”

It also appears that the Crumbl Cookies founder may have commented on the video in the past. Many in the comments refer to the owner commenting on the video “again.” However, these comments can’t be found on the video.

Thankfully, other alleged Crumbl Cookies employees hopped in the comments to say that this location may have been an anomaly.

“I used to work at a crumbl location,” a user said. “We donated so often that eventually we were asked to hold off by our food and care coalition…”

In some cases, this appears to be true. In an April 2021 Today article, Danice Tatosian, Director of Community Nutrition at Food Bank For New York City, said that, when possible, the food bank tries to avoid donations of “baked goods such as cookies, cakes, pastries, sweetened muffins.”

Update 2:10pm CT March 8: A Crumbl Cookies spokesperson shared with the Daily Dot information about the company’s policy when it comes to donations.

“End-of-day cookie donations have been part of Crumbl’s process from day one. It’s a core part of who we are and what we believe,” the spokesperson said via email. “All leftover cookies that meet Crumbl quality standards should be donated to local organizations at the discretion of the store owner. This is our corporate policy and we continue to work with and train all our partners on this protocol.”

As for why this location had so many cookies in its dumpster, the spokesperson said it is the responsibility of each location to handle donations. “As a franchise business model, each individual store is responsible for their donations. Many of our partners are actively donating to various local organizations including first responders and other groups that have agreed to receive such donations,” the statement read.

She’ree told the Daily Dot via TikTok direct message that she has seen cookies thrown in the dumpsters across multiple locations.

“I’ve visited a few different ones and found cookies,” she said. She added that the food waste she’s seen in her time dumpster diving is “insane.” “So much perfectly good food is wasted everyday , when it could be donated,” she said.

As far as criticism about her dumpster diving habits goes, Tiffany said she isn’t worried.

“It really just takes a little common sense to tell what’s safe to consume and what’s not,” she explained. “Most times I’ve found the cookies they’ve still been stuck to parchment paper all slid right into a trash bag, still warm. Those are the ones I eat.”