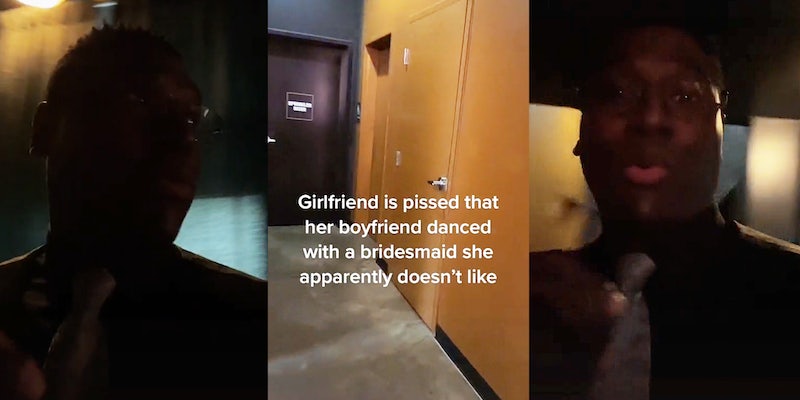 ‘100% on her side’: Girlfriend berates boyfriend during wedding after he danced with a bridesmaid, sparking debate

Update 10:21am CT, Aug. 23: Darnell told the Daily Dot that while the sound appears original, he reused it.

Original story: A wedding DJ on TikTok posted some drama he allegedly captured on the job.

In a video with over 1.9 million views, user Darnell (@djd_nail) films the outside of a bathroom, where an argument can be heard taking place.

In the text overlaying the video, Darnell claims that the fight began after a woman caught her boyfriend dancing “with a bridesmaid she apparently doesn’t like.”

“Do you understand me?” the woman screams at him.

As the video has accumulated views, it has also sparked a fierce debate, with many citing reasons for taking one side over the other.

Some users were on board with the woman’s perspective, saying there was probably more to the argument than what is heard in the video.

“That man knew what he was doing…” wrote one user.

“That’s a ‘you’ve been caught before with her’ scream,” a second added.

“Don’t blame her,” a third shared. “especially if he knew she didn’t like her.”

“Imagine how embarrassed she was [to] be completely betrayed by that boy in front of everyone,” a fourth offered.

However, some said that the woman was in the wrong for her reaction, as she is the main one screaming in the clip.

“If the roles were reversed and a dude was yelling like that nobody would be siding with the man,” claimed a TikToker.

“Toxic Relationship 101,” a further user stated. “He needs to get out of that relationship.. fast.”

Even more users recalled their own experiences in similar situations.

“I was a bridesmaid at my sisters wedding & the groomsman paired with me was threatened with divorce if he danced with me during the bridal party dance,” remembered a commenter.

“My husband had a 22 month affair with the bridesmaid I was being ‘ridiculous’ about…” an additional user said.

“My ex danced with the girl he cheated on me with at prom,” another wrote. “I understand.”