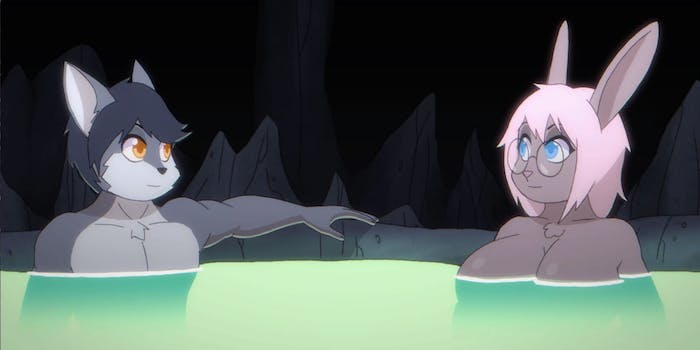 Dungeon Tail is free to play.

Developed by adult furry artist and animator OmegaOzone, Dungeon Tail follows Dungeon Delver Academy students Vyncent and Iris as they explore the mysterious Enchanted Caverns for their Dungeon Exploring 101 exam. Along the way, the wolf and bunny duo find themselves in all sorts of lewd predicaments, from a naughty hookup in a hot bath to a hedonistic gang bang led by adorable androgynous slimes. Each of these scenes is fully animated with sound effects and voice work, and players can scroll back and forth to return to some of their favorite moments mid-coitus.

OmegaOzone is a lifelong furry who started creating adult furry art a few years ago, he told the Daily Dot. He found the experience “very liberating and exciting,” in no small part because the furry community has been friendly to him and his work.

“I decided to start making Dungeon Tail around a year ago after spending a lot of time making art and animations based on other [intellectual properties] and wanting to strike out and create something on my own,” OmegaOzone said. “It’s basically a combination of my love of furry art, Dungeons & Dragons, and adventure games.”

Dungeon Tail wears its Japanese role-playing game (JRPG) inspirations on its sleeve, from the game’s logo referencing the Final Fantasy series to the slime foes mirroring Dragon Quest’s classic starter enemies. For the game’s sexual content, OmegaOzone said he was influenced by Interspecies Reviewers, an adult comedy anime about monster girl sex workers and the various human and monster creatures who review their brothels.

OmegaOzone stresses Dungeon Tail’s demographic falls toward “any adult furry who’s into lewd situations revolving around monsters like slimes and tentacles.” As development continues, he plans to appeal toward a wide assortment of gender identities and sexualities, and he says gay, lesbian, and trans representation could be added into the game.

“I’m open to lesbian scenes for sure! Seeing as Vyncent, the main player character, is a male, I’d probably have to add some voyeuristic flair to it or even make it extra spicy by involving a sex-change spell or potion for him. There’s a lot of different ways to go about it and that’s the beauty of a fantasy world,” he said. “A trans character would be pretty sweet as well! I could easily see a roguish Hyena type character working for that situation but of course, anything is possible.”

“I’m just really grateful for all the support so far and I hope to continue providing raunchy goodness to all,” OmegaOzone said. “Times are rough and it’s more important than ever to stay inside and have a good lewd time!”

Dungeon Tail is in active development with new content added approximately once every one to three months. Players can download Dungeon Tail from OmegaOzone’s itch.io page or subscribe to his Patreon for pre-release builds.