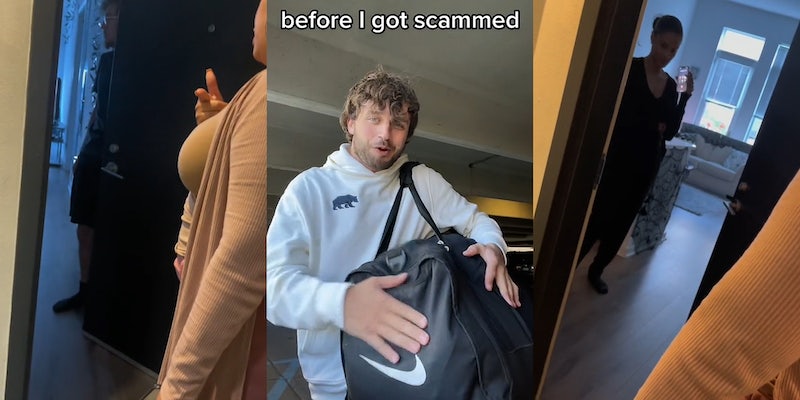 ‘How are you Airbnbing something you’re renting?’: Man says Airbnb host listed their rented apartment, scammed him out of $1000

'You guys have been doing this for a long time already. You’re getting locked out as of Monday.'

A user on TikTok has gone viral after sharing his story of losing $1000 on an Airbnb rental.

In a video with over 209,000 views, user Austin (@_austin_wallace_) documents his experience of arriving at the apartment, only to find it currently occupied. When the renter is called to explain the situation, they deny knowledge of what’s going on despite having extensive contact with Austin prior to his arrival.

Austin had paid $1000 for a month’s stay in the apartment.

Per the leasing agent seen in the video, Nina, issues like these were ongoing in the apartment. Accordingly, the renter’s lease was soon to be terminated following the events in the video.

“You guys have been doing this for a long time already. You’re getting locked out as of Monday,” Nina says of the renters. “How are you Airbnbing something you’re renting? And you have a balance on your account. You’re not even paying, and she wants to act like she’s blindsided like she doesn’t know what’s going on.”

As of May of this year, the city has more Airbnbs than available apartments to rent, per Curbed. While it’s difficult to obtain the number of scam listings on the site (scams can vary wildly, from outside payment scams to the apartment not existing at all, per VICE), New York Attorney General Letitia James put out a warning in May against the scams, advising people to be cautious and look for red flags before booking a rental in the city.

In the comments, some users shared their own Airbnb scam stories.

“Some stranger rented out MY apt and AirBNB refused to remove the listing or do anything,” wrote one user. “Poor kid who paid was stressed.”

“Same thing happened to me my first time moving to New York,” claimed another. “@airbnb didn’t do anything and I was out $982 which was almost half my monthly income..”

“u need to call ur bank or cc & stop payment immediately,” advised a user. “take ur confirmation & go make a police report. that’s not a NY thing…”

“Austin, make friends with that leasing agent. She said your scammer is getting evicted Monday. Get that apartment,” suggested a second.

Above all, some users said the video put them off using Airbnb.

“People need to stop using Airbnb. With all the videos and complaints out there and all the problems,” explained a commenter.

Austin has since found temporary accommodation.

The Daily Dot reached out to Austin via email.

Update 10:36am CT Sept. 26: An Airbnb spokesperson told the Daily Dot via email that Austin was provided a full refund. They also noted the company is offering rebooking support to the TikToker through its new AirCover program, which states that the company will find guests a similar Airbnb or give them a full refund if they are unable to check in, among other guest protections.