This article contains sexualized images that may be NSFW.

First reported by Motherboard, Tramps Against Trump is an equal-opportunity campaign of democratic nudity. While many of the photos on the campaign’s Instagram account—which, at the time of publication, was offline—currently feature women, Tramps Against Trump supports all genders and sexualities.

A spokesperson for Instagram declined to comment on the status of an individual account and instead pointed the Daily Dot to the company’s Community Guidelines, which forbid nudity.

According to Tramps Against Trump’s FAQs, the group “does NOT endorse any presidential candidate, we simply are advocating for anyone BUT TRUMP.” 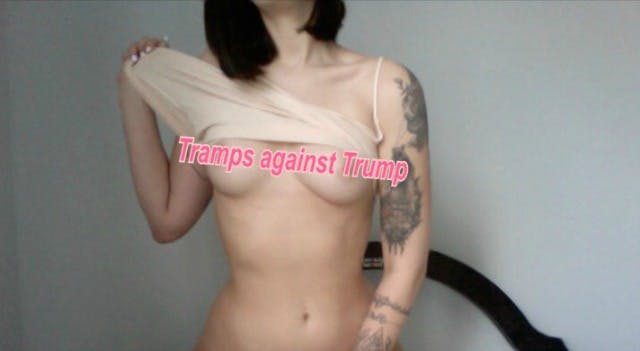 To get a nude photo sent to you, simply send the group a direct message with a photo of yourself outside a polling station, and Tramps Against Trump will reward with you with some naked goodness. Just make sure you’re 18 years old or older. The group also recommends not taking your photo inside a voting booth, which is illegal in some states.

If, instead, you’d like to be the one baring it all, you can send a censored photo of yourself to the campaign. Just be aware: All photos sent to Tramps Against Trump may be posted on the group’s social media accounts.

It is not clear what the demographics of the people sending in photos to Tramps Against Trump have been so far, and the group did not immediately respond to our request for comment.

Tramps Against Trump is the American version of Sluts Against Harper, a campaign launched in opposition to Stephen Harper, Canada’s former prime minister who was defeated by Liberal Justin Trudeau in the country’s 2015 election.

Even without campaigns like Tramps Against Trump, gender and sexuality have permeated the 2016 election. Trump, who owned the Miss Universe pageant until he sold it in 2015 and once defended his penis size during a GOP debate, has been widely criticized—and, in turn, defended—over his treatment of women.

The simple fact that Hillary Clinton would be the first female presidential nominee in American history if she wins the Democratic contest puts gender front and center—just not quite as front and center as sending people nude photos for voting a certain way.

Update 11:09am CT, June 23: Tramps Against Trump has relaunched on Tumblr, which has less restrictions regarding nudity than Instagram.