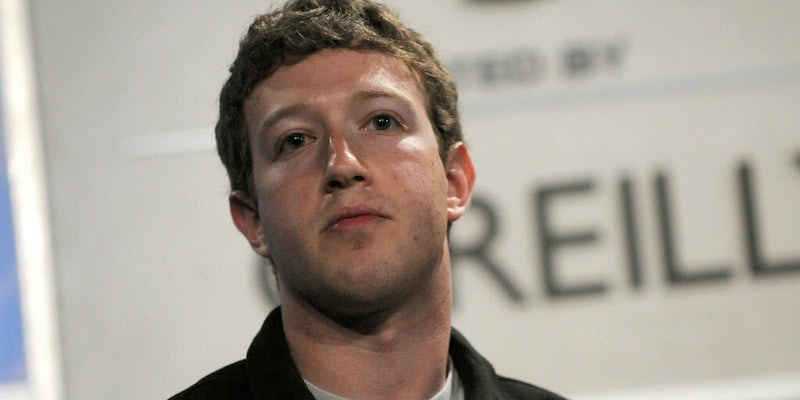 The gathering will be led by Paul Grewel, not Zuckerberg.

Facebook is in crisis mode. The social network will reportedly hold an open meeting on Tuesday for all employees to discuss how political analytics firm Cambridge Analytica illegally harvested data from 50 million users, the Verge reports.

Paul Grewel, the company’s deputy general counsel, will head the meeting and provide background on the incident, which caused Facebook’s stock to plummet in premarket trading on Monday. The meeting, reportedly scheduled for 10am PT, will have a polling feature so concerned staff can ask questions. This will be the first time Facebook brings together its entire team to discuss the scandal.

Founded in 2013, Cambridge Analytica is a data firm funded by Republican Robert Mercer and once employed Steve Bannon as a top executive. The company, which worked for Trump during the 2016 election, uses a number of data analytics techniques to support political campaigns by identifying voters’ personalities so clients can better influence their vote.

According to a report from the Guardian, the data used to create psychographic profiles of Facebook members was collected from a personality test app developed by Global Science Research, a company owned by University of Cambridge professor Aleksandr Kogan. Called thisisyourdigitallife, the app was downloaded by around 270,000 people. Not only did it gather intimate details about those who used it, it also collected data on their friends and family. In total, around 50 million profiles were harvested and later sold illegally to Cambridge Analytica.

Facebook learned about the data exchange at the end of 2015. At the time, it said it was “carefully investigating this situation” and asked all parties to destroy the information they gathered. Facebook warned Cambridge Analytica that the data they acquired could not be used without permission. Cambridge Analytica assured the company the data had been exterminated, however, Facebook announced on Friday that the company lied to them and kept copies for itself. It subsequently suspended the account and launched an investigation into the incident. Facebook said it would take legal action if necessary.

The social giant is now scrambling to pick up the pieces following criticism in the days after the scandal was revealed to the public. On March 19, Sen. Edward Markey called for the Senate Committee on Commerce, Science and Transportation to hold hearings on the situation since only a fraction of users gave permission for the third-party app to collect their information. Facebook lost $23.8 billion on Tuesday after its stock dipped four percent.