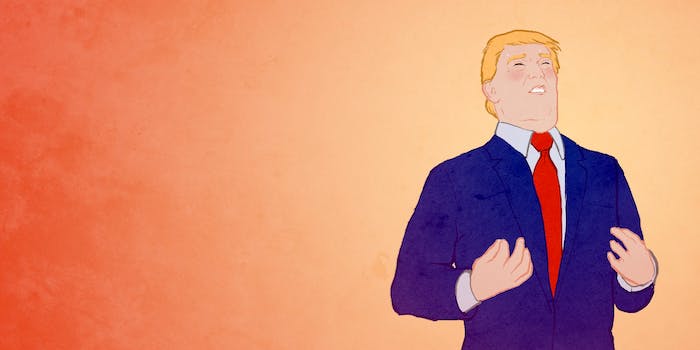 Conservatives gasped, liberals guffawed, and everyone just kind of agreed that a skin flick about someone in the process of running for high office represented a tipping point in the coarsening of American popular culture—something few paid attention to because, at the time, the economy was in total free fall, and people were kind of preoccupied.

“The best case scenario: He watches it, gets a little annoyed, maybe tries to get it taken down.”

Judging by the source material, Trump Temptation may end up skewing more toward funny than sexy. “With his oily orange skin glistening in the sunlight as if he were a soggy Cheeto, his hair unkempt and messy, like a gorgeous rat’s nest. He was beautiful,” one passage reads. “His gorgeous ass flapped behind him like a mouthwatering stack of pancakes in his pants. My hunger for pancakes had never been stronger.”

Daniel says casting is still in progress, but there’s going to be an effort to stay as close to the original source material as possible. He’s shooting for a July 4 release date, both as a birthday present to America and to give delegates at the Republican National Convention, which kicks off in Cleveland on July 18, something to watch while dozing in their hotel rooms after long nights of talking small government over big margaritas.

“Now that I think about it,” he added, “if it did change people’s opinions about him, that would be scary as hell!”

Trump Temptations isn’t the only time Daniel has mined the frothy mixture of Trump and sexuality for comic material. Earlier this month, over 20,000 people watched a live-stream of Daniel getting a tattoo on his leg of Trump giving oral sex to a disembodied penis.

“[Trump is] the opposite of anything that should have to do with sex,” Daniel said, explaining his fixation with Trump’s sexuality. “Putting him in uncomfortable sexual settings just makes me laugh. Like when kids swear. It’s cheap comedy, but it makes me laugh.”

Daniel views a Trump presidency as a something of a mixed blessing. “[If Trump wins, Saturday Night Live] will get another four great seasons and I’ll get a bunch more jokes,” Daniel wrote an in email to the Daily Dot. “Until he runs the country into the ground and we all die. But at least we’ll do it laughing!”