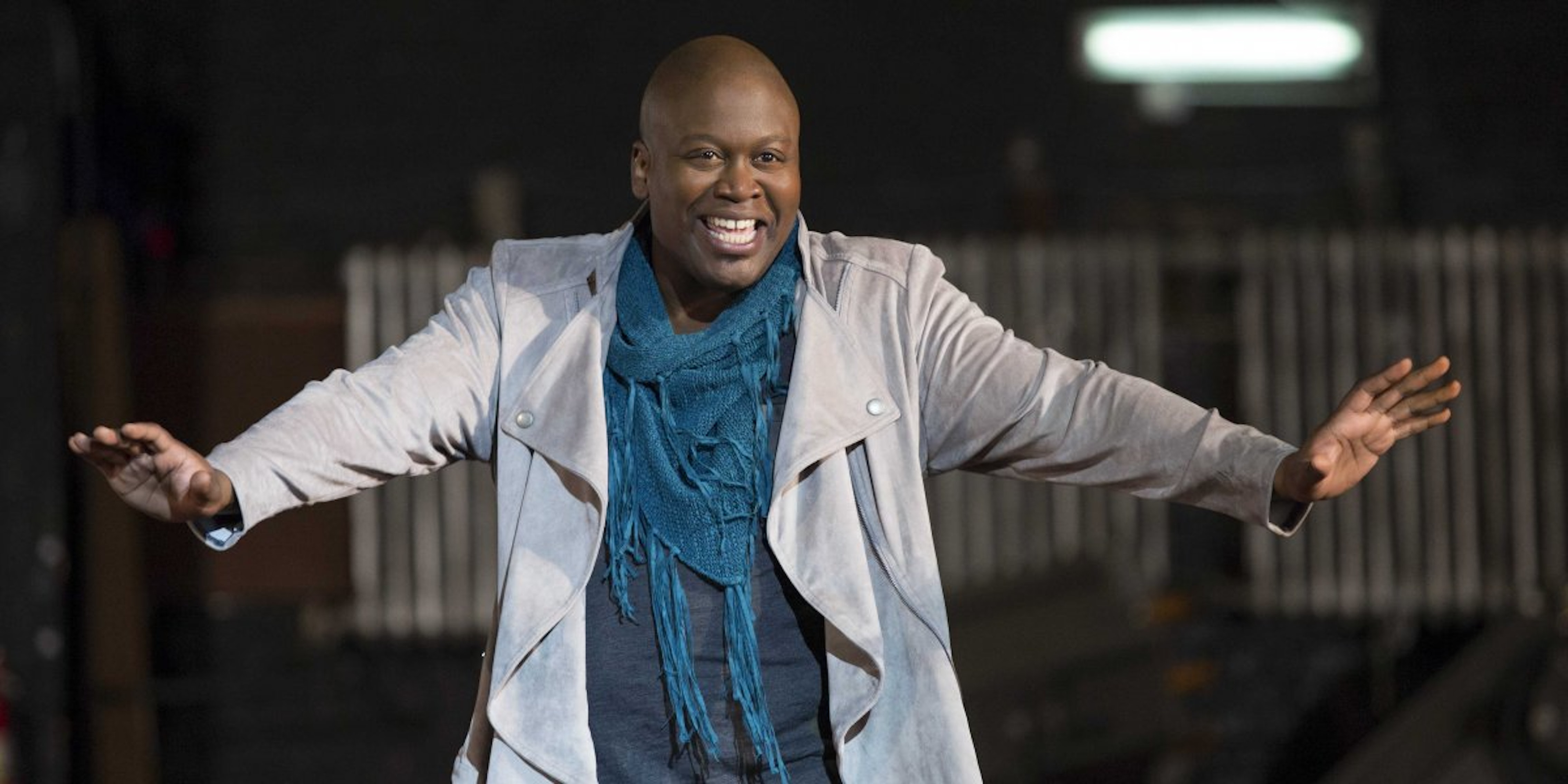 Titus Andromedon is one of the breakout characters on the Netflix series. But why is he such a stereotype?

I’d spent the “date,” if you could call it that, feeling smug and confident in my matchmaking skills. But I quickly discovered it hadn’t worked out as well as I’d hoped. “That guy sucked,” Evan said almost immediately after we left the room. “Why did we hang out with him?”

“I dunno, I thought you’d think he was cute,” I said, knowing full well that he didn’t, and that he wasn’t.

“No!” he said. “You set us up either because I’m gay and he’s gay and you thought that was all we needed for us to get along, or because you actually thought I’d find him attractive. Either way, it’s offensive.”

Part of the reason why I feel so ashamed about this was because I had essentially treated Evan like a GBF (Gay Best Friend), the term most commonly used to describe gay men whom straight women view as little more than accessories. While the female heroine gets to have a rich inner life, the GBF is afforded no such luxury; most of the time, he’s not even able to get himself laid. He’s little more than a sassy, unblinking accessory, a bedazzled brick on the heroine’s road to romantic fulfillment, a sparkly prop who pads out the narrative with pithy dick jokes and tips on how to wear a cropped blazer.

The GBF is omnipresent in popular culture, from Elijah in Girls to Luther in Don’t Trust the B—- in Apartment 23 to Jack in Will and Grace to the eponymous 2013 film lightly poking fun at the trope. Recently, it reared its ugly head once again with the introduction of Titus Andromedon, the sidekick—because that’s what he is, a sidekick—to former Indiana Mole Woman Kimmy Schmidt in the Netflix series Unbreakable Kimmy Schmidt.

Played with gusto by musical theater star Tituss Burgess, Titus Andromedon is, in many ways, the ultimate gay stereotype. He’s an aspiring Broadway diva, having unsuccessfully auditioned for a role in The Lion King 20 times. (Although any self-respecting musical-theater gay would know that were he an actual musical-theater gay, he’d be auditioning for Hamilton instead.) He’s ultra-flamboyant, requiring the services of a hetero acting coach to learn how to “play straight.” And he revels in drama, constantly peppering Kimmy with questions about what life in the bunker was like; for instance, when she tearfully tells him she’ll have to relive her traumatic experience by testifying at her kidnapper’s trial, his response is to ask what channel the trial is airing on.

If all this weren’t enough to telegraph “screamingly gay,” Titus has his own dance music video, an ode to black dick titled “Pinot Noir.”

As a poor, aging, fat, gay, black man, Titus exists on the margins of society, which is played for laughs by head writers Tina Fey and Robert Carlock (neither of whom, it should be noted, are fat, gay, poor, or black). While at first glance, he appears to exist solely as a sounding board for Kimmy’s issues, a defining trait of the GBF, some fans of Kimmy Schmidt have argued that Titus doesn’t embody the GBF trope so much as he actively subverts it.

As Flavorwire’s Moze Halperin (who, full disclosure, is a longtime F of mine) points out, Titus’s own struggles with being marginalized by society mirrors Kimmy’s struggle to overcome the trauma of life in the bunker. “He and Kimmy have met opposite, but similarly sculpting, forms of adversity—his has been societal and hers, as a former ‘mole-woman,’ has been characterized by the utter lack of society,” he writes. Halperin argues that Titus subverts the GBF trope by virtue of the fact that he gets nearly as much screen time as Kimmy, and that their relationship appears to be symbiotic: “She is his confidante and aid as much as he is hers—he has his own life as much as she has hers.”

But this raises the question: How much, exactly, do we know about Titus’s inner life? We know that he grew up a closeted gay teen in the Deep South. We know he has a wife back home, which is played for laughs in the season finale. And we know that he uses Barbie stationery and wears a T-shirt that says “Baby Slut” underneath his normal clothes. His life story is almost entirely defined by being black and gay—which doesn’t exactly make him any more empowering or subversive than the Anthony Maraschinos and Stanford Blatches and Jack McFarlands of yesteryear.

That’s not to say that Burgess isn’t wonderful, or that there aren’t men as flamboyantly, happily, proudly gay as Titus in the world; he is, and there are. Nor is it fair to say that a Netflix comedy series has a solemn responsibility to use a character like Titus as a platform for making ham-fisted statements about the visibility of LGBT people, or that the next season of Kimmy Schmidt focus entirely on Titus’s rich inner life (I want to know just as much about the weird sex stuff in the bunker as Titus does).

But what I would like to see is LGBT characters like Titus not permanently relegated to the status of sounding board, or comic relief, or second-billed sideline character. I’d like to see gay men serve not as foils to wide-eyed, improbably shiny-haired white women, but as the stars of their own narratives, with the wide-eyed, improbably shiny-haired white woman acting as foils to them. We need more actors like Burgess taking center stage in their own stories; we don’t need Unbreakable Kimmy Schmidt nearly as much as we need Unbreakable Titus Andromedon.

That incident in the hotel room with my Boston friend was not the first or last time that I’d inadvertently forced Evan to play Titus to my Kimmy. And when I watched the series on Netflix last weekend, I was reminded of how often I’d asked him to accompany me on a shopping trip to Barney’s to buy a bathing suit on a trip he wasn’t going on, or cried to him for hours over the phone about a bad grade or one of the many dudes I was sleeping with without even asking him how his day was; I remember once doing this less than 24 hours after his middle school friend had passed away of a brain aneurysm.

Although Evan has called me out on this more than a few times durign the course of our decade-long friendship, for the most part, my shittiness as a person has only been paralleled by his infinite patience as a friend. But what watching The Unbreakable Kimmy Schmidt made me realize is how strong he was for tolerating that bullshit for so long, and how much I wish he had pushed my whining, white-girl, shiny-haired-self aside and put his own problems into the spotlight for once. Because what did I have to complain about? I didn’t have to endure weird sex stuff in a bunker.

Our culture likes to reinforce the notion that we’re all stars of our own stories, and that some people can be relegated to the role of supporting character, as comedian or stylist or therapist. Like Titus, my own Gay Best Friend is all three of these things, and he’s better at them than any professional could be. But he’s also wry and sardonic and loyal and generous and speaks fluent German and knows more about movie trivia than Robert Osborne and has cheekbones that could cut through glass and most importantly, is the most resilient person I know; more than Kimmy, more than me, he is truly unbreakable. And it’s their time for them to star in their own stories.